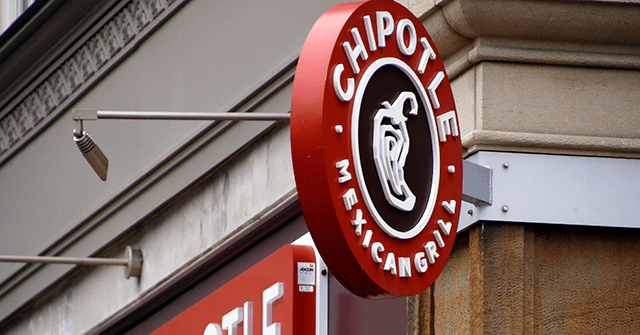 Fast-food burrito chain Chipotle will raise menu prices to cover the rising cost of labor to attract Americans back to work after the Democrats continued with extra-generous jobless benefits, the company announced Tuesday.

Executives will raise menu prices by about 4 percent to cover the cost of the increased employee wages, the New York Times reported.

This follows a Times report in May that said Chipotle was “looking to hire 20,000 employees for its peak season and to staff the more than 200 restaurants it plans to open this year,” noting that employees would have an hourly wage increase between $10 and $18 an hour. At the time, the fast-food chain was one of the latest to raise wages to entice more Americans to work, as the county started to reopen from the pandemic.

Additionally, businesses saw higher demand for restaurant workers and had a tough time filling jobs due to the “extra-generous jobless benefits.”

According to the Times, the higher cost of labor translates to having to raise their food prices.

“We really prefer not to [raise the prices],” Chipotle chief executive Brian Niccol said Tuesday. “But it made sense in this scenario to invest in our employees and get these restaurants staffed, and make sure we had the pipeline of people to support our growth.”

In April, Breitbart News reported, “The unemployment rate ticked up to 6.1 percent,” noting that the uptick in unemployment “could be a sign that hiring is being held back by enhanced unemployment benefits and schools that have not reopened full time, requiring some parents to stay home to take care of children.”

Due to the benefits continuing, “businesses say that they cannot hire enough workers to fill positions because of the government’s enhanced unemployment benefits program.”

For reasons such as this, restaurant chains are being forced to increase wages to attract new candidates for jobs. This is “a stark contrast from earlier this year when Congress was debating raising the minimum wage to $15 an hour, and the restaurant industry argued such a move would imperil the economic recovery,” the Times added.

Evidently, Chipotle executives said that despite the increase in the price of food, the items remain reasonable, the Times reported. Mr. Niccol noted that their price increase to about 4 percent equates to “quarters and dimes that we’re layering in.”