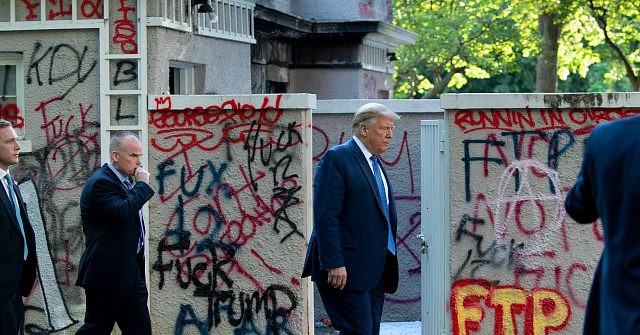 A look back at how cable news went all in on the debunked narrative that President Trump gassed peaceful protesters for a “photo op.” pic.twitter.com/4pS4aQ8hpc

Those claims have been definitively debunked by an inspector general’s report from the Department of Interior, which confirmed the Trump administration’s story: that U.S. Park Police had already planned to enlarge the perimeter around the White House after violent attacks by rioters on law enforcement, and cleared the park using pepper balls, not tear gas.

The report also confirms that it was the D.C. Metropolitan Police Department, under the control of Democrat Mayor Muriel Bowser, who used tear gas at a different site nearby, after protesters had already been cleared from the park.

At the time, the Post‘s 12-minute “video timeline” was celebrated as an important piece of investigative journalism:

This, from the @washingtonpost, is an extraordinary piece of journalism. It’s a video timeline of the federal law enforcement attack on peaceful protesters at Lafayette Square. This is how the Trump administration violently cleared the path for a photo op: https://t.co/vJyDe8Xx6L

The Post reported that “police” had used tear gas, adding that “their actions cleared the way” for Trump’s “photo-op” holding a Bible at the St. John’s Episcopal Church, which had partly been burned by rioters the night before.

The video timeline does not distinguish between federal law enforcement forces and Metropolitan Police Department personnel. It also ignores the violence directed at law enforcement on the two nights prior to the park being cleared.

The Post noted that a tear gas canister was found, as if to dispute claims by federal law enforcement that they had used it.  (Ironically, the Post also noted that Mayor Muriel Bowser called federal actions “shameful,” though it was her own city’s forces that had used the tear gas against protesters — an action that Washington, DC, is now defending in federal court.)

We did not obtain evidence suggesting that the USPP cleared Lafayette Park so the President could visit St. John’s Church. Instead, we found that by approximately 10 a.m. on June 1, the USPP had already begun developing a plan to clear protesters from the area to enable the contractor to safely install the antiscale fence. … We found no evidence establishing that the USPP knew of any potential movement by the President through Lafayette Park until hours later.

False claims about Trump’s actions that day were repeated by Democrats and the media throughout the 2020 presidential election campaign. President-elect Joe Biden repeated those claims in blaming Trump for the Capitol riot in January.

Joel B. Pollak is Senior Editor-at-Large at Breitbart News and the host of Breitbart News Sunday on Sirius XM Patriot on Sunday evenings from 7 p.m. to 10 p.m. ET (4 p.m. to 7 p.m. PT). His new novel, Joubert Park, tells the story of a Jewish family in South Africa at the dawn of the apartheid era. His recent book, RED NOVEMBER, recounts the 2020 Democratic presidential primary from a conservative perspective. He is a winner of the 2018 Robert Novak Journalism Alumni Fellowship. Follow him on Twitter at @joelpollak.

This post has been updated to note the Post‘s 2021 duPont-Columbia Award for its incorrect video.