BREAKING NEWS
*Ex-Laker Devean George Says Shaq ‘Did Not S*** In My Shoe,’ Calls Rumor A Lie*Bob McGrath death: Original star of Sesame Street dies aged 90*‘Snoop DeVille’ From 50 Cent’s ‘P.I.M.P.’ Video Up for Sale*Disgruntled Atlanta Hawks Star Trae Young Missed Game Over Spat With Coach Nate McMillan*WATCH: Houston Volleyball Player Dives on Table to Save Ball During NCAA Tournament*PHOTOS– Officers Rescue 3 People from Sinking Car: ‘You All Make Us Proud’*England star Raheem Sterling left out of World Cup win over Senegal after a burglary at his home*‘Yellowstone’ Recap: The Blood Finally Flows*Poll: Near Majority of Republicans Want Less Foreign Aid as Congress Poised to Grant Ukraine $37 Billion*Jewish UFC Fighter to Kanye West: ‘If You’ve Got a Problem with Me or My People, Come See Me, Bro’*USMNT’s World Cup progress has all eyes turned eagerly to 2026: ‘On the way’*Mayim Bialik honors Leslie Jordan after his final episode of ‘Call Me Kat’ airs*Conflicting Reports on Iran Disbanding Morality Police, Hijab Law*Sam Bankman-Fried Dodges on Call to Testify at Maxine Waters’ Request on FTX Collapse*George Clooney, Gladys Knight, U2 Get Kennedy Center Honors from Biden*California, a Free State Since 1850, May Pay $233k in Reparations per Slavery Descendant*‘Emancipation’ Producer Apologizes Over ‘Whipped Peter’ Pic at Premiere*Pro-Life Group in Nebraska Receives Shooting Threat Note Allegedly Signed by ‘Jane’s Revenge’ *Timcast IRL – The Whims Of Totalitarians #shorts*‘Sesame Street’ Veteran Bob McGrath Dead at 90
Skip to content
November 23, 2022
by MICHAELANTONIO 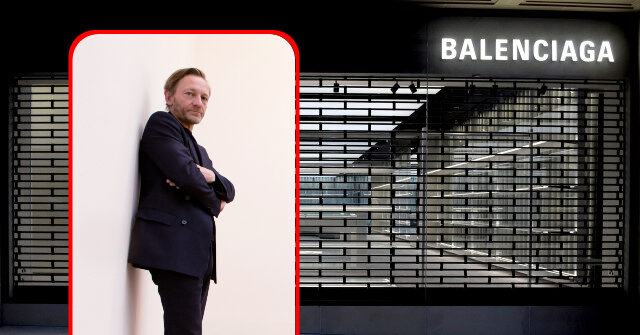 Yet another advertisement from fashion company Balenciaga has been revealed to give a nod to the sexualization of children.

Balenciaga apologized for the disturbing ad campaign on Instagram, saying “We apologize for displaying unsettling documents in our campaign” and saying that they “strongly condemn abuse of children in any form.”

Update: Balenciaga has now publicly apologized and is “taking legal action” against the creator of their disturbing ad campaign featuring children with teddy bears in bondage gear alongside court documents about the legalization of virtual child sexual abuse. pic.twitter.com/e9IEDYoMne

The company also noted that they are “taking legal action against the parties responsible for creating the set and including unapproved items” in the photoshoots.

But now it’s been found that yet another disturbing advertisement from Balenciaga seems to subtly reference child pornography and the occult as well. A book by artist Michael Borremans sits on the desk behind an adult model. One of Borremans’ books, “Fire from the Sun” features realistic paintings of young, nude children. Some of the children appear to be covered in blood.

One particularly disturbing picture from Fire from the Sun shows a young boy who appears to be a toddler. He is fully nude and covered in blood. A disembodied hand sits at his feet and other limbs are strewn about an all-white room. Other children, who appear to be a similar age as the toddler, are seen crouching in the corner.

In other paintings from Borremans, people in white masks appear to be chewing on human limbs. Meanwhile, images from his “Black Mould” series show people of varying statures in black, hooded robes that cover their faces. In some paintings the hooded figures appear to be dancing while in others they are standing in a circle. Adults and children, both dressed in the black robes, are depicted together.

Spencer Lindquist is a reporter for Breitbart News. Follow him on Twitter @SpencerLndqst and reach out at slindquist@breitbart.com