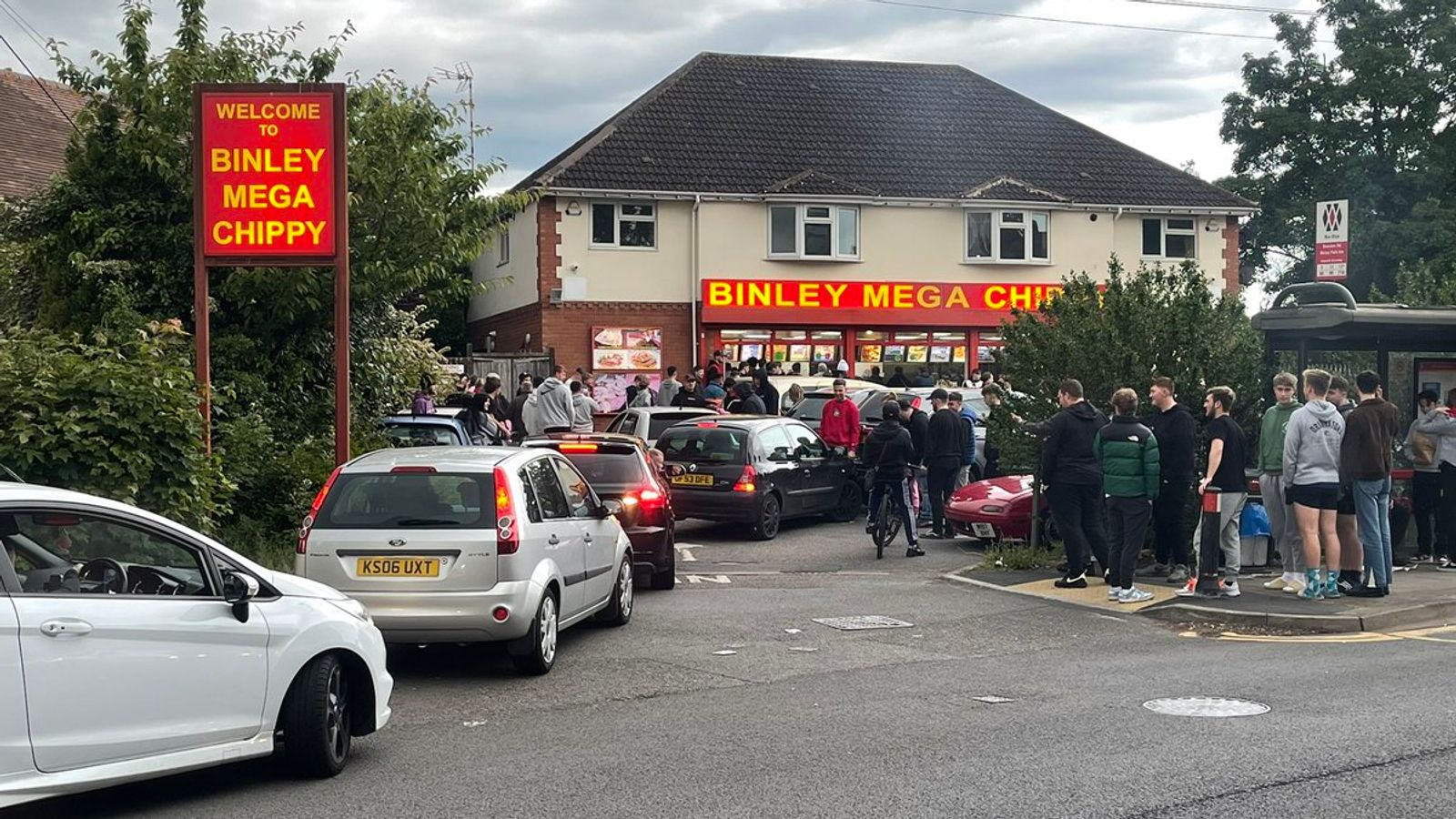 This is the story of Binley Mega Chippy.

For years it was like any other English chippy: serving pies for £2.40, fish and of course chips from its haunt on the outskirts of the UK’s ninth-largest city.

A regal vision in red and gold, it has been a reliable oasis of fried delicacies and cold drinks for tired drivers making their way along Coventry‘s A428.

But like planking in urban spaces, the ice bucket challenge and that dress that may or may not have been blue, the internet took Binley Mega Chippy and turned it into a viral TikTok fiesta – and a culinary destination.

Owner Kamal Gandhi, 70, now has a huge number of customers, some of whom have apparently travelled from France, America and even Australia.

So: how did a local chip shop go from small fry to Charlie Potatoes?

The first known mention of Binley Mega Chippy on the internet came in 2009 according to Know Your Meme, a website dedicated to documenting various online phenomena.

A Twitter account under the name Dave Rutt posted: “Been to Binley Mega Chippy. Have Pukka Pie and Chips. Steak and Kidney. Lush.”

But it would be more than a decade before the chip shop would truly shoot to fame.

As the years went by more and more tweets referencing Binley Mega Chippy began to appear, but still the eatery continued on in relative obscurity, not knowing what was to come.

The viral hysteria over the fast food outlet was not sparked until early 2022, when it was featured in a slideshow of multiple UK chippies on TikTok on 26 April.

On 18 May an account called binleymegachippyfan53 posted two TikToks about the chip joint, and continued to do so throughout the rest of May.

An ironic internet trend was born, and soon it was spreading.

Other TikTok users got involved, many changing their usernames to reference Binley Mega Chippy.

And then there was a song…

Decades of research and millions of pounds of advertising have shown society that a good jingle can send a product skyrocketing, and the same appears to be true for chip shops.

On 25 May binleymegachippyfan53 posted a 10-second clip with a static picture of Binley Mega Chippy, accompanied by a cheerful jingle.

As of early June, that TikTok video has 1.7m views and has spawned various spinoffs and remixes.

Oh, and it’s going to be stuck in your head now for the rest of your life.

Overall, the hashtag #BinleyMegaChippy has a whopping 495.2m views.

And, naturally, people have been visiting from literally all over

People have been trekking hours to visit Binley’s most famous food spot with customers queuing out the door, to the delight of owner Kamal Gandhi, who said it’s “been mad”.

He told his local paper he feels “very glad” people are loving the food and are eager to come back.

There are reports of people travelling from France and Portugal and even Texas and Australia to visit what may be the most famous chip shop in the world right now.

And about that jingle…

A quick search on Twitter reveals such glowing reviews as: “I’m not a praying man but I’m asking God to please take the Binley Mega Chippy song out of my head.”

“That stupid binley mega chippy song on tiktok is ruining my day.”

Binley Mega Chippy, on Binley road in Binley, is open until 11pm every day.