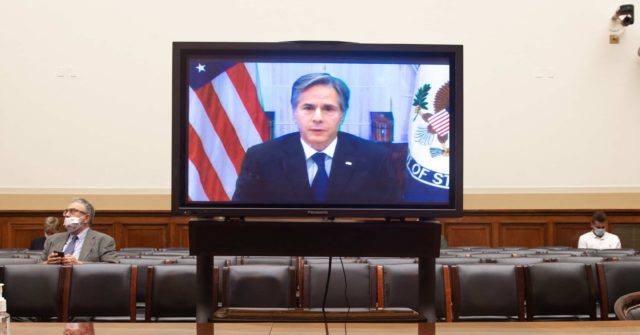 House Republicans struggled to squeeze answers from Secretary of State Anthony Blinken Monday in his testimony at the House Foreign Affairs Committee, as the career diplomat parsed his answers carefully and dodged the toughest questions.

Republicans did touch on several of the questions Breitbart News had previously suggested they ask — as Democrats ran interference for the administration, arguing that chaos was inevitable in any withdrawal, and that Trump left “no plan.”

The latter point is false, as Breitbart News’ Kristina Wong noted in a fact check, citing an earlier interview she did with Trump administration national security official Kash Patel, who described a pullout plan the Biden Administration ignored.

Several Republicans demanded that Blinken resign, but he simply ignored them. The setup of the event, in which he was allowed to testify from his office in the State Department, made it harder to Republicans to press him for clear answers.

One of the most important moments occurred offscreen — and, ironically, on the left-wing MSNBC network, when Rep. Ami Bera (D-CA) pushed back on Blinken’s claim that the Biden administration had “inherited” a flawed situation with regard to special immigrant visas (SIVs) for Afghans who had helped the U.S. Bera said that while Democrats had tried reaching out to the administration, it was only in July that Blinken and his colleagues showed any interest in the issue.

Republicans did manage to extract several important facts: there are roughly 100 Americans stilltrapped in Afghanistan; the administration does not know how many green card holders or SIV applicants are in Afghanistan, nor how many ineligible Afghans were evacuated instead; no pallets of cash have been sent to secure the release of Americans; and Blinken thinks the Taliban will find it in their self-interest to create a “genuinely inclusive and representative government.”

The GOP also managed to draw Blinken into several contradictions. He kept claiming that “no one” foresaw the rapid collapse of the Afghan military, while also claiming that the Biden administration had planned for all “contingencies.” He said that there was no intelligence predicting that the Taliban would overrun the country, but could not explain why he had ignored the warnings in a dissenting cable from diplomats who warned that the government of Afghanistan would collapse.

Rep. Darryl Issa (R-CA), who is the most experienced member of the caucus on oversight issues, pointed out — using a prop — that the State Department had told Americans in Afghanistan to find their way to rescue flights without the help of the U.S. government. Issa did not press the point, as he could have done by highlighting the many contradictory updates that the State Department had provided. But Blinken looked rattled for a moment — as he should have been throughout.

Yet Republicans failed, in general, to draw attention to Blinken’s central problem: his lack of credibility. Blinken promised that Afghanistan would not be another Saigon; his department said the embassy in Kabul would remain open even as the Taliban closed in; and then, after the withdrawal, he claimed the U.S. would now “lead with our diplomacy.” When the Taliban arrived, he was on vacation. How can he still lead U.S. foreign policy when nothing Blinken said came to pass?

Blinken continues to maintain that the only thing that went wrong was the unexpected collapse of the Afghan military. That  is where questions must begin, not where they should end. Did the Biden administration ignore the intelligence, as Rep. Lee Zeldin (R-NY) implied? Or was our intelligence so flawed, as Rep. Juan Vargas (D-CA) suggested, that we could not see the obvious?

Someone is responsible, but the longer Blinken can evade these questions, the harder it will be to address the problems that led to the ongoing crisis.