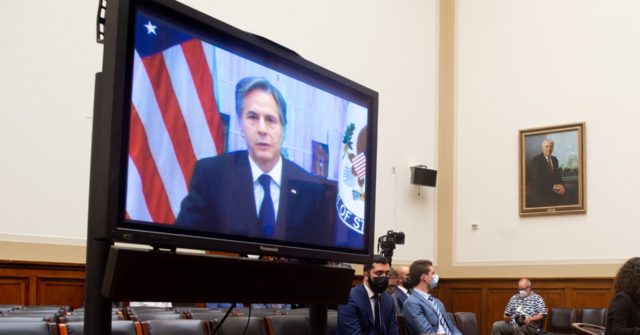 Secretary of State Antony Blinken testified Monday at the House Foreign Affairs Committee that he still wants the Taliban to have a “genuinely inclusive and representative government” despite naming one that includes terrorists and excludes women.

As Breitbart News reported last week, the new government named by the Taliban includes a Haqqani network terrorist with a large U.S. bounty on his head, and excludes any members of Afghan opposition groups, as well as women.

Still, Biden told Congress that he believes it would be in the Taliban’s self-interest to appoint a western-style government:

The country is, in so many ways, as you pointed out, fractured among different groups and different ethnic groups — north, south, east, and west — different outside actors that may be supporting one group or another. And so for the Taliban to fully consolidate control, that remains an open question. It is also why, ironically, it would be profoundly in the Taliban’s interest to actually put forth a genuinely inclusive and representative government because to the extent it doesn’t, to the extent that everyone other than the Taliban is left out, that’s only likely to, after some period of time, whether tomorrow or next year or thereafter, to cause those who are left out try to assert one way or another, their rights and needs.

The Taliban appear to believe their own self-interest includes executing rivals and hunting door-to-door for journalists.