Bolsonaro’s party’s request calls for the nation’s electoral authority to “apply the legal consequences it deems necessary” in response to the discovery that electronic voting machines manufactured before the year 2020 used in the 2022 presidential election did not document individual identification numbers in internal logs. The party also claimed to find software inconsistencies not present in models built after 2020.

The voting machines in question represent 280,000 machines, or 59 percent, of those used during the election.

The president of the Liberal Party, Valdemar Costa Neto, said in a public interview on Tuesday that his party was acting with the intention of “strengthening democracy” in Brazil. Marcelo Luiz Ávila de Bessa, the lawyer who signed the formal report presented to the TSE, pointed out “inconsistencies in voting machines manufactured prior to the year 2020” that are allegedly not present in the newer voting machines used in the election.

“That does not mean that fraud occurred, but that there is a possibility of fragility that leads to a lack of certainty,” Bessa clarified. 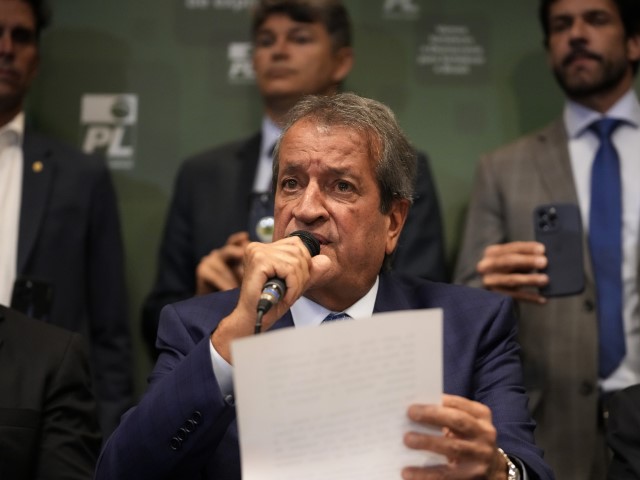 Valdemar Costa Neto, the leader of President Jair Bolsonaro’s Liberal Party, center, speaks during a press conference regarding an investigation carried out by the party pointing out inconsistencies in voting machines used in the general elections, in Brasilia, Brazil, Tuesday, Nov. 22, 2022.(Eraldo Peres/AP)

Brazilian news network Jovem Pan reported on Tuesday that, according to an excerpt from the formal request document, annulling the votes from machines made prior to 2020 – which the request is formally contesting – and only counting votes cast through the voting ballot machines made in 2020 (which represent 40.82 percent of the total number of votes) would leave Jair Bolsonaro with 51.05 percent of the votes and Lula da Silva with 48.95 percent. The legal petition did not explicitly request the annulation of any votes, only urging the electoral court to take measures it considers appropriate.

According to the official results published by Brazil’s electoral authorities, Luiz Inácio Lula da Silva was elected president with 50.9 percent of the votes against Bolsonaro’s 49.1 percent.

On September 28, four days before the first round of elections in Brazil, the Liberal Party released a statement in which it claimed that it had found flaws in the electoral system that could affect the electoral results.

Shortly after the TSE received Bolsonaro’s request this week, TSE head and Supreme Federal Tribunal (STF) justice Alexandre de Moraes responded by demanding Bolsonaro and the Liberal Party present an amended version of the request within 24 hours that also includes data from the first round of the elections, which took place on October 2.

De Moraes’ request would force the Liberal Party to state whether or not it also challenges the integrity of the results of the first round of the election, where the Liberal Party and pro-Bolsonaro allies respectively obtained huge victories in Congress and regional governorships.

“Bolsonaro’s action at the TSE is chicanery that must be sanctioned as a lawsuit in bad faith,” the president of the Worker’s Party, Gleisi Hoffmann, said on her Twitter account. “Enough of the malice, irresponsibility and insult of the institutions and democracy. The election was decided by the vote and Brazil needs peace to build a better future.”

Following the October 30 runoff election, pro-Bolsonaro Brazilian citizens have continuously held peaceful protests against the results of the election and against the nation’s supreme and electoral courts, while demanding more transparency in the electoral process. In response to the protests, de Moraes – a notorious anti-”fake news” crusader – ordered Brazilian banking institutions to block the bank accounts of 43 companies and people linked to the protests, which, according to the judge, were being used to “finance illegal and anti-democratic acts.” Pro-Bolsonaro protesters have not been implicated in any large-scale acts of violence. 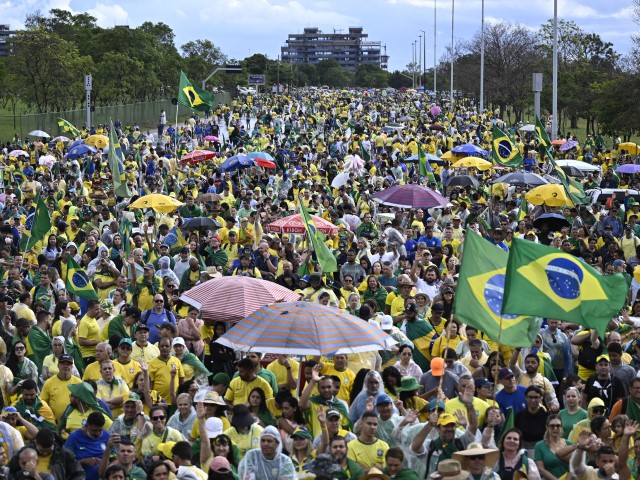 Supporters of Brazilian President Jair Bolsonaro take part in a demonstration against the results of the runoff election, in front of the Army headquarters in Brasilia, Brazil on November 15, 2022. (Mateus Bonomi/Anadolu Agency via Getty Images)

Bolsonaro himself has drastically reduced his public presence following the election, his vice president citing a skin condition that prevents him from wearing pants.

Luiz Inácio Lula da Silva, who was convicted and sentenced to over two decades in prison for corruption until the STF overturned his conviction in 2021 — not challenging the evidence that resulted in his conviction, but simply alleging that the court that convicted him did not have jurisdiction and allowing him to run for president — has not personally responded to Bolsonaro’s election results challenge at press time. 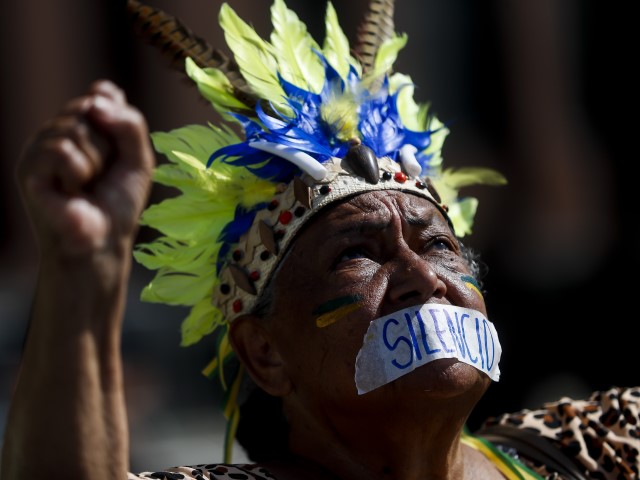 A supporter of Brazilian President Jair Bolsonaro wears tape that reads in Portuguese “Silence” during a protest against the result of presidential elections, which Bolsonaro lost, outside a military base on Republic Proclamation Day in Rio de Janeiro, Brazil, Tuesday, Nov. 15, 2022. (Bruna Prado/AP)

Christian K. Caruzo is a Venezuelan writer and documents life under socialism. You can follow him on Twitter here.