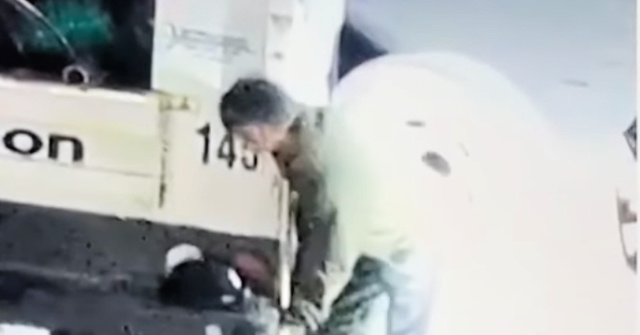 A California teen is being lauded after he helped save his father’s life after a truck had fallen right on top of him.

Matthew Wilkinson was working on the breaks of his work truck with his 15-year-old son, Dalin, on a late Monday night at their Oakdale home when the rotator became stuck.

The father went underneath the truck and began hitting the rotator, but the truck suddenly rolled and fell on top of him. The impact of the truck had punctured his lung, broken some ribs, and separated his shoulder.

“All I could think about was the breath coming out of me,” Matthew told KCRA 3. “I was just squished. I couldn’t talk. I couldn’t yell.”

Without wasting time, Dalin sprung into action and lifted the truck as much as possible to give his father a chance to roll out from underneath.

“It just dropped right on him. I was scared. I heard him make a noise like his soul was leaving his body. It was crazy,” said Dalin. “I just ran over and tried as hard as I could to get it up enough to get him out.”

While at the hospital, Matthew was unsure how he had rolled out until someone in the family reviewed the home’s security footage, where he realized what Dalin had done.

Had Dalin not acted quickly, his father’s injuries could have been more severe, as a punctured lung due to blunt chest trauma can be life-threatening, per the Mayo Clinic.

Matthew has since returned home from the hospital and is back with his family, and he is thankful that Dalin was there to act fast and save his life.

“My son is my hero. He saved my life,” said Matthew.

This is not the first time a son has acted heroically to save their father this year.

In January, a Wisconsin father suffered a seizure while driving and crashed the vehicle. However, he was saved by his four-year-old son, who hopped out of the car and flagged down a stranger for help.