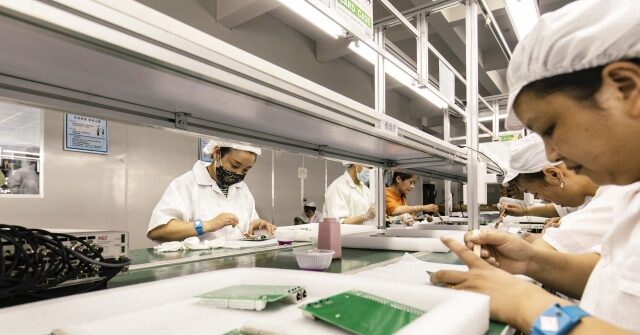 The United States Chamber of Commerce, along with other corporate special interest groups, is lobbying lawmakers to oppose a ban on the U.S. federal government doing business with Chinese chipmakers.

Sens. John Cornyn (R-TX) and Chuck Schumer (D-NY) have offered a bipartisan amendment to the latest National Defense Authorization Act (NDAA) that would ban the U.S. government from getting semiconductor chips from Chinese firms — expanding on provisions that ban the federal agencies from doing business with Chinese telecommunication companies.

A letter, published in Politico, signed by the Chamber of Commerce — along with groups like the Aerospace Industries Association, National Foreign Trade Council, and Security Industry Association — is attempting to tank the latest expansion to how entangled the U.S. government can be with Chinese firms in the semiconductor sector.

The Chamber and other groups write in the letter:

… adding the covered semiconductors to part B of section 889 would harm federal agencies’ ability to procure the essential goods and services they need to promote our nation’s well-being, while putting added financial pressure on businesses that are operating in an inflationary economy.

The Chamber’s own merchandise is often manufactured in China.

Meanwhile, the American Free Enterprise Chamber of Commerce, which takes a hard stance against China’s involvement in the U.S. economy, blasted the Chamber and corporate special interest groups for their wanting the government to remain tied to China’s chipmakers.

“Even as some in Washington have become more interested in promoting Chinese priorities, it’s vital Congress put America first,” American Free Enterprise executives wrote in response to the Chamber’s letter:

Ultimately, the Chamber is doing the bidding of Davos CEOs who are more interested in globalism than promoting American security; they want to keep spending taxpayer dollars on cheap, Chinesemade chips. They’re putting their corporate profits – built through sending America’s advanced manufacturing to China – before the American taxpayer and U.S. national security. [Emphasis added]

According to American Free Enterprise, the Chamber has “recruited” outgoing Sen. Rob Portman (R-OH) to oppose the amendment.