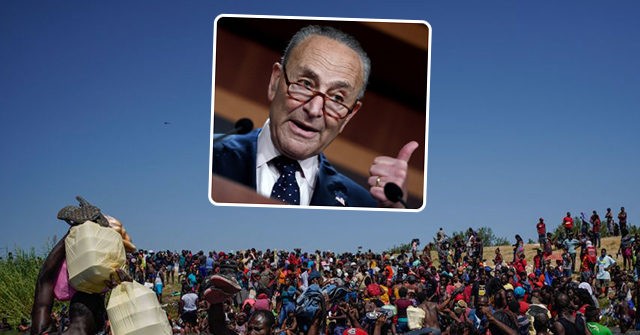 “I urge President Biden and Secretary Mayorkas to immediately put a stop to these expulsions and to end this Title 42 policy at our southern border,” Schumer said. “We cannot continue these hateful and xenophobic Trump policies that disregard our refugee laws.”

“We must allow asylum seekers to present their claims at our ports of entry and be afforded due process,” Schumer added.

Title 42 pertains to preexisting law that permits explosions of migrants who have recently been in a country where a communicable disease was present. Over 1.1 million migrants have been stopped from entering the United States under the code since 2020.

Schumer’s comments come in opposition to the Biden-Harris administration, which renewed the existing policy in August. But last week a federal judge blocked the White House from exercising the code by granting a preliminary injunction due to the law’s alleged “irreparable harm.”

Politico reported that the judge’s order only applies to families, “meaning the Biden administration can continue to expel single adults arriving at the U.S. southern border. Unaccompanied children have been exempt from being expelled using Title 42.”

This same activist judge made a similar ruling against Title 42 last year. The Trump administration appealed, and his ruling was overturned.

President Biden must also appeal immediately. America’s border security is too important to be undermined by far-Left activist judges. https://t.co/xc1BF18Ogl

Corporate media has been critical of the Biden-Harris administration enforcing Title 42 on an individual basis. On Monday, a reporter asked White House press secretary Jen Psaki what the administration plans to do about stopping the expulsions under Title 42.

“So the — the crisis at the border in Del Rio: We heard DHS say they’re going to continue expulsions under Title 42. So what is the White House’s message to Haitian immigrants seeking asylum?” the reporter asked.

Psaki responded by defending the existing law on the books that Trump enforced. “We don’t have the immigration system up and running in the way we want, including there is still a pandemic and Title 42 remains in place,” she said.