Former Virginia Gov. Terry McAuliffe (D) has reverted to a debunked claim he used in his 2013 gubernatorial campaign to attack his current opponent, Glenn Youngkin, over Youngkin’s tax plan.

McAuliffe asserted in the most recent Virginia gubernatorial debate, as well as in a campaign ad he released on Friday, that Youngkin’s tax plan would reduce funding for education. 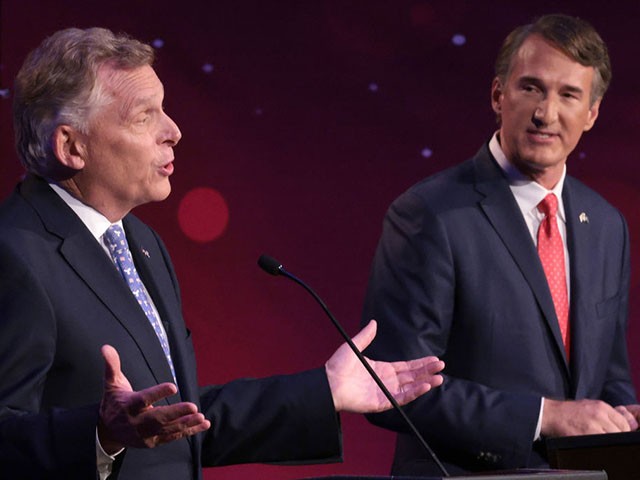 McAuliffe used this same line of attack in 2013 against his then-opponent, Ken Cuccinelli, claiming Cuccinelli’s tax plan would have cut 8,000 teachers’ jobs. The fact-checker outlet Politifact rated the claim at the time as “false,” noting “McAuliffe’s doomsday estimate only works by twisting Cuccinelli’s plan into an unrecognizable shape.”

Politifact once again chimed in in 2021 to fact-check McAuliffe’s same claim about eliminating teachers’ jobs after the gubernatorial debate. Politifact stated McAuliffe’s estimate that Youngkin would cut 43,000 teachers’ jobs had come from a calculation made by a leftist nonprofit, Virginia Excels, which had used income tax comments made by Youngkin that were in fact outdated.

Youngkin had previously indicated he would like to see Virginia’s income tax repealed, but the Virginia Republican made clear in August that he did not believe this would be feasible.

The McAuliffe ad from Friday cites the same nonprofit again, Virginia Excels, as well as the Center for American Progress, another group that used Youngkin’s old income tax comments. The ad then cites an op-ed from the Washington Post published in July that again assumes Youngkin’s aim is to eliminate Virginia’s income tax.

Virginia Excels’ estimate, in particular, drew attention from the Republican Party of Virginia (RPV), which filed an IRS complaint against the group last week. RPV claimed Virginia Excels “engaged in overt and unambiguous political campaign intervention in violation of federal law,” citing the one employee listed on Virginia Excels’ website, Taikein Cooper, as an indicator that it operates as an “extension of the Democratic Party” rather than a 501c3. Cooper is chair of the Prince Edward County Democrats and has, according to the Virginia Public Access Project, donated to both the Democrat Party of Virginia and McAuliffe’s PAC Common Good VA.

Youngkin, for his part, has made education policy a centerpiece of his campaign, claiming he plans to boost funding for teachers’ salaries and school facilities. The Virginia Republican ramped up messaging on the topic after the last gubernatorial debate in which McAuliffe claimed he did not believe “parents should be telling schools what they should teach,” a comment that was met with a tsunami of backlash.

The Youngkin campaign blasted McAuliffe for reusing the misleading tax plan attack as a means to hit Youngkin on education, describing the Virginia Democrat as “all talk.”

“All talk, no action career politician Terry McAuliffe has been exposed for rolling out the same old failed promises, failed policies, and misleading lines of attack that he’s been repeating for 12 years,” Rapid Response Director Christian Martinez said in a statement. “Virginians have taken notice and are overwhelmingly throwing their support behind a new kind of leader in Glenn Youngkin, who will go to work for educators by raising teacher pay with the largest education budget in Virginia history.”

The McAuliffe campaign did not respond to a request for comment.