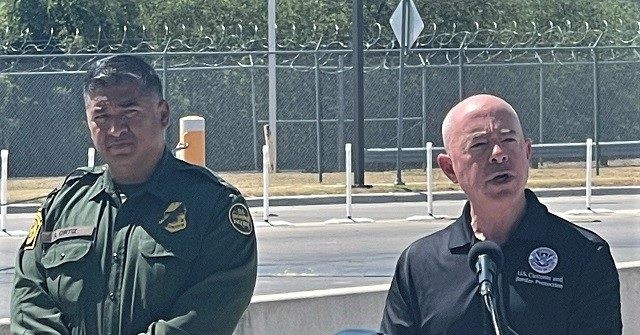 DEL RIO, Texas — Department of Homeland Security Secretary Alejandro Mayorkas told reporters Monday that his agency is stepping up the number of daily flights to remove Haitian migrants from the makeshift camp along the Rio Grande border with Mexico. The secretary stressed that irregular migration is not safe and will not be tolerated.

“We are very concerned that Haitians who are taking this irregular migration path are receiving false information that the border is open, or that temporary protected status is available,” Secretary Mayorkas told reporters. “That is false information, irregular migration poses a certain serious security risk to the migrants themselves trying to enter the United States illegally is not worth the tragedy, the money or the effort.”

Mayorkas told reporters his agency is stepping up removals of Haitian migrants under the CDC’s Title 42 Coronavirus protection protocol.

“If you come to the United States illegally, you will be returned,” he stressed. “Your journey will not succeed, and you will be endangering your life and your family’s lives.”

The DHS secretary said Border Patrol and the U.S. Coasts Guard removed 3,500 migrants from the camp over the past few days and 3,000 more on Monday.

“We in DHS are securing additional transportation to accelerate the pace and increase the capacity of removal flights to Haiti and other destinations in the Western Hemisphere,” he stated. “We anticipate at least one to three flights per day.”

U.S. Border Patrol Chief Raul Ortiz added that his agents removed 2,500 migrants on Sunday. He reiterated the secretary’s comments and said DHS is accelerating the frequency and capacity of the Title 42 flights to “expel individuals to Haiti and other countries of origin.”

Mayorkas added that migrants who cannot be removed under Title 42 and have no legal authority to remain in the U.S. will be “placed in expedited removal proceedings. “DHS is conducting regular expulsion and removal flights to Haiti, Mexico, Ecuador, and Northern Triangle countries,” the secretary stated.