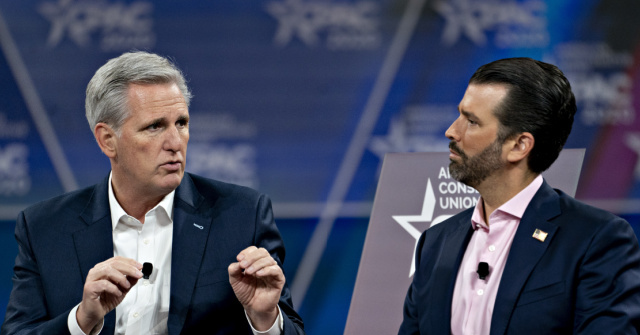 Donald Trump Jr. called out Republicans who are against former President Donald Trump’s choice for the next House Speaker, GOP Leader Kevin McCarthy (R-CA), and said those Republicans are “in effect empowering those who impeached Donald Trump.”

Trump Jr.’s remarks come amid concerns from top conservatives about a “doomsday scenario” where House Democrats would undercut GOP power by working with certain Republicans to oppose McCarthy and install a more moderate Speaker.

Although McCarthy overcame a challenge from Rep. Andy Biggs (R-AZ) and received the House Republican nomination for Speaker of the House by a margin of 188 to 31 votes, several House Republicans are on record saying they would not vote to elect McCarthy as Speaker.

Those Republicans against McCarthy include Reps. Andy Biggs (R-AZ), Matt Gaetz (R-FL), Bob Good (R-VA), Matt Rosendale (R-MT), and Ralph Norman (R-NC), plus a handful of Republicans who have not publicly committed to supporting McCarthy.

With the GOP expected to have a 222-213 House majority, just five Republicans could prevent McCarthy from securing the 218 votes to win the speakership if all members voted for a candidate.

“So in their quest to ‘own the establishment’ by stopping Kevin McCarthy, Andy Biggs and others are actually in effect empowering those who impeached Donald Trump. This is a Democrat dream come true for a GOP Congress,” Trump Jr. tweeted. “Genius move guys.”

So in their quest to “own the establishment” by stopping Kevin McCarthy, Andy Biggs and others are actually in effect empowering those who impeached Donald Trump. This is a Democrat dream come true for a GOP Congress.
Genius move guys. https://t.co/SKQ0Kjl6GC

Despite his detractors, McCarthy is confident he will be the next Speaker of the House. McCarthy plans to put up a fight to win on subsequent ballots if he does not win outright on the first vote.

“At the end of the day, we’ll get there,” McCarthy told reporters.

McCarthy’s 188 votes are “impressive,” according to Breitbart News’s Washington Political Editor, Matthew Boyle, because they are more than what former House Speaker Paul Ryan received in his 2015 conference vote.

The vote for Speaker will take place on the first day of the next Congress on January 3.