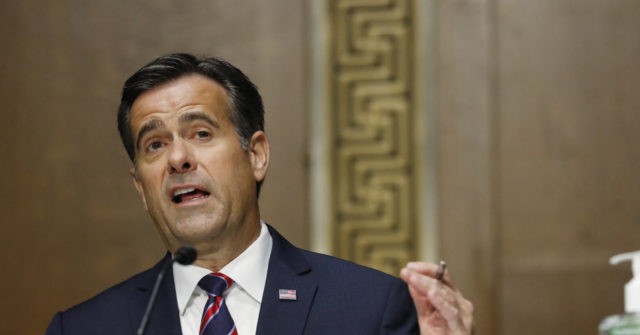 Former Director of National Intelligence John Ratcliffe said in a recent exclusive interview with Breitbart News that China’s increasing aggressiveness towards Taiwan stems from Beijing viewing the Biden administration as “softer” than the Trump administration.

“I predicted China would get more aggressive with this administration because they see them as softer and more cooperative,” he told Breitbart News in an interview this week.

“Following the debacle in Afghanistan, countries are going to test the United States’ resolve, and it’s starting with China. They’re going to get more aggressive, especially in the Indo-Pacific,” he said, adding:

You’re already seeing it with them flying planes over Taiwan at a frequency we’ve never seen before. And it’s not just fighter jets, which is what it used to be; it’s bombers — which would be a prelude to an amphibious assault — over the air defense identification zone. I predicted that China would get more aggressive because they see leadership in the White House that views China differently than the Trump administration did.

Taiwan is a democratic self-ruled island with robust unofficial diplomatic and military ties with the United States and other western democracies, but China sees Taiwan as a rogue province it plans to reunify before 2050 or sooner, by military force if necessary.

Some experts have predicted that China could move to seize Taiwan before the end of 2030, and the Taiwanese defense minster said last week that China already has the ability to launch an invasion against Taiwan, but is currently deterred by the cost and consequences.

Ratcliffe said he predicted that China will continue to get more aggressive against Taiwan over the next three years until they perceive there is stronger leadership in the White House that will stand up or repel it from taking action. He predicted China would try flying into Taiwan’s sovereign airspace next, not just its ADIZ.

It would not surprise me if their next step is to test the reaction to planes flying into Taiwan’s sovereign airspace. I think they’ll just continue to test. I don’t have any insight at this point in terms of when they might, but I would just say that I expect them to be more aggressive for the next three years, because until the Biden administration stands up to their aggression and provocation, why would they stop?

In an August interview with ABC News, Biden suggested the U.S. would defend Taiwan if it were attacked — a stance that was a departure from U.S. policy of “strategic ambiguity” on Taiwan meant to deter Chinese aggression against Taiwan but maintain a peaceful status quo. The State Department was forced to walk back the president’s remarks.

More recently, Biden said he spoke with Chinese Communist Party Chairman, President Xi Jinping, and that they agreed to abide by the “Taiwan agreement,” although there is no such thing. The Taiwan Ministry of Foreign Affairs said they sought clarification about Biden’s remarks and were reassured that U.S. policy towards Taiwan had not changed, according to Reuters.

Ratcliffe said that lack of clarity on Taiwan is contributing to a dangerous situation.

“The Biden administration’s messaging on Taiwan is not clear. So as a result, why wouldn’t China test our resolve and our commitment to Taiwan? What’s particularly dangerous now is the combination of factors that China has never had before, but do have now,” he said, adding:

They believe their naval fleet is finally capable of an amphibious assault. We still have the finest naval fleet in the world, but it’s not positioned in the South China Sea. They have increased the size of their naval fleet, and also improved the fleet’s technology and the types of ships. They’ve improved their army as well. Basically all of their armed forces are stronger and better equipped than they were a number of years ago. And all of that is consistent with their plan to be the world’s superpower by 2035.

Ratcliffe said with the Trump administration, there was the “backstop of an American president who they knew would enforce red lines, who had had literally taken out adversaries like [Islamic Revolutionary Guard Corps leader Qasem] Soleimani and [ISIS leader Abu Bakr] al-Baghdadi, someone who had stood up to China with tariffs and sanctions and worked to correct trade imbalances that had existed under both Republicans and Democrats for decades.”

“The question now is how do they view the Biden administration?” Ratcliffe said, pointing to top Chinese diplomat Yang Jiechi publicly berating Secretary of State Antony Blinken during a diplomatic meeting in Alaska. “They disrespected our top diplomats on U.S. soil in Anchorage, barely weeks into the Biden administration, and nothing happened. That would have been met with strong and swift rebuke from the Trump administration.”

“It was literally just some sternly worded letter, whereas when China was being a bad actor during the Trump administration, there were tariffs and sanctions and calling them out at the UN and on the world stage. It’s a very different approach. And it’s one that I think China has taken advantage of and will continue to take advantage of,” he said.

Ratcliffe, who steered the intelligence community towards addressing the threat from China during his tenure, said China has proven itself time and time again to be a “ruthless autocracy.”

“They’re responsible for a worldwide pandemic. They’re a country that tortures and kills its own people, who has and will continue to lie, cheat, and steal to dominate the world marketplace and every country in it,” he said.

And unlike the old Soviet Union, China is an enemy within, he said.

“China has embedded itself in our society and in our economy. And because of that, China can influence the actions of some Americans who care more about either gaining power in Washington or making money on Wall Street. Biden sees them as a strategic competitor and wants to engage in goodwill, diplomacy and handholding,” he said.

He said he supported the CIA recently announcing it would stand up a mission center on China, saying it was an overdue move that built on the foundation he created as DNI.

He also said he did not agree with the former Pentagon software chief, who recently resigned over concerns that the artificial intelligence war with China was already “lost,” but said, “there is a real concern that we could lose that battle.”

To address the threat from China, he recommended increasing spending within the intelligence community and across economic and military sectors to address the China threat, and getting rid of bureaucratic hurdles preventing the private and government sector from working together.

“From the standpoint of technology, that means investing so that the United States. We need to be smarter and more agile and remove the obstacles and the bureaucracy to doing those things,” he said.

But he said, “the only way that we’ll build the consensus that’s needed to do that is for people to be honest about what the intelligence says about China.”