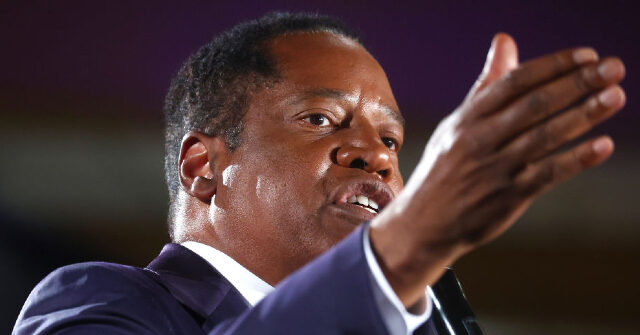 The Black Lives Matter campaign and enterprise is “destroying what made America great and using blacks as a means to do so,” Larry Elder, writer and executive producer of Uncle Tom II, remarked on Thursday’s edition of SiriusXM’s Breitbart News Daily with host Alex Marlow.

Elder said his latest film details the political weaponization of race-based grievance — including “white guilt” — as a tool to undermine America by advancing communist ideology.

Elder maintained that black Americans benefited “a strong belief in the values of America” following the American Civil War, including high rates of marriage and commensurate low rates of divorce, entrepreneurship, Christian faith, and patriotism. The Black Lives Matter operation, he added, amounts to “a very assault on what made black people survive and thrive after slavery.”

Elder warned that high rates of single-parenthood among blacks in recent decades relative to earlier American history is predictive of a broader national trend of increasing familial collapse.

“Women have been incentivized to marry the government, and men have been incentivized to abandon their financial and moral responsibility, and that’s not just affecting the black community,” he observed. “Now, 25 percent of white kids are born outside of wedlock. Forty percent of all American kids are now born outside of wedlock, something that would not be possible if not for our subsidization of slovenly behavior.”

“Slavery and Jim Crow are the excuse for a lot of white liberals to enact policies that have hurt the very people that they claim to care about,” he stated. “My friend, the late Walter Williams, once wrote a column where he issued a proclamation — a pardon for white people — so they would stop doing things that were antithetical to the best interests of black people. Most notably, the welfare state, race-based preferences, set-asides, affirmative action.”

Elder highlighted the news media’s selective hyping and suppression of incidents of violent crime based on racial criteria of suspects and victims.

“It is a filthy disgusting lie that America is systemically racist and the police are engaging in systemic racism,” he held. “Just the other day, there were three Arkansas cops beating the stuffings out of a white suspect. It was a one-day story. Nobody cared. They kneeled on him. They pounded him. We’re talking about three people beating the crap out of this guy, and it was a one-day story. Nobody cared. Why? Because the suspect was the wrong race. Had he been a black guy, we’d know his name. The cops would be flashed all over the newspaper. They’d be prosecuted.”

Elder concluded by emphasizing the partisan political aspect of the Black Lives Matter campaign and enterprise.

“This is just such a fraud done by the Democrats in order to make sure black people are angry and pissed off, so they pull that lever to the tune of 90 to 95 percent [for Democrats] every four years for the presidency,” he said.