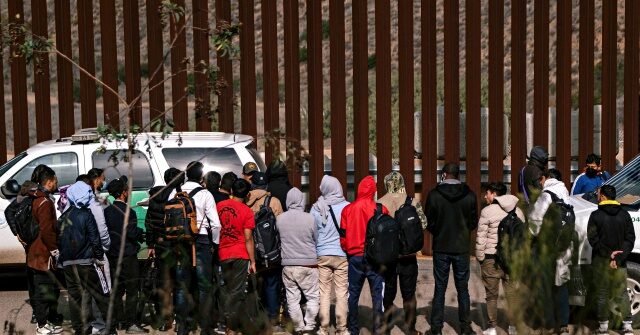 Only 14 percent of Americans support amnesty and citizenship for those who have entered the country illegally, and an even smaller portion of Hispanic voters feel the same way, a Convention of States Action/Trafalgar Group survey obtained first by Breitbart News found.

Perhaps more telling is the fact that less than three percent of Hispanic voters, 2.8 percent specifically, believe those who entered the country illegally or are in the asylum review process should be granted amnesty and citizenship, while 78.9 percent of Hispanic voters believe that those who entered the country illegally should be expelled.

According to the survey, “55.6 percent of Hispanic voters believe that those who entered the country illegally should be expelled and that those who are seeking asylum should have their reviews completed and granted asylum or be removed,” while 23.3 percent of Hispanic voters “believe that only those in asylum review should be granted amnesty and citizenship,” per summary of the survey.

Further, most, 63 percent, view securing the southern border as “essential to U.S. national security,” and a majority also believe state governors play a role, having a responsibility to step up and secure the border if the federal government fails to do so.

The House, under Speaker Kevin McCarthy’s (R-CA) leadership, will not consider any legislation that grants amnesty to illegal aliens, making that vow during an exclusive interview with Breitbart News.

“We know first and foremost one of our greatest strengths is the rule of law, so you have to have an immigration system based upon the rule of law. You have to secure the border. The immigration system is broken and we’re going to fix it. Yes,” McCarthy said when asked if he could pledge no amnesty during his leadership, emphasizing “yes” to that pledge afterward as well.

The survey comes on the heels of President Biden’s Department of Homeland Security (DHS) reaffirming that it has “no records” on over 377,000 border crossers released into the U.S. interior via the ATD program.