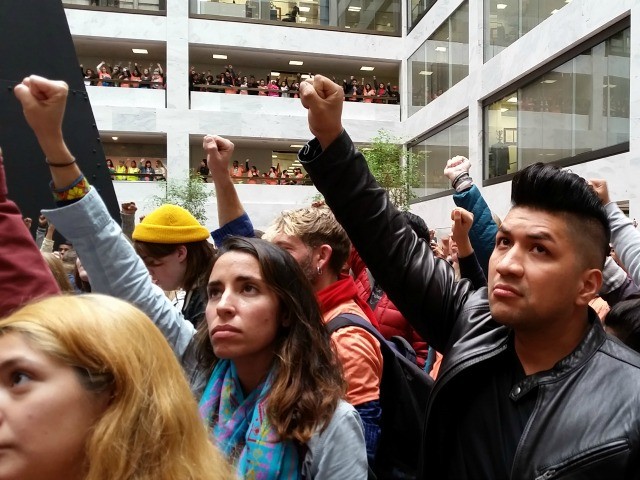 Senate Parliamentarian Elizabeth MacDonough ruled that the Democrats’ plan to slip a massive amnesty for millions of illegal aliens into a bill does not comply with the Byrd Rule regarding budgetary reconciliation. Democrats hoped they could use their $3.5 trillion infrastructure bill to pass an amnesty. MacDonough said Democrat lawmakers could not use reconciliation, which primarily relates to spending changes to the budget, to make such a drastic policy change as granting amnesty to illegal immigrants.

“Changing the law to clear the way to [lawful permanent resident] status is tremendous and enduring policy change that dwarfs its budgetary impact,” MacDonough wrote in her decision.

Lawmakers have frequently tried to use reconciliation to effect significant change since the bill can pass through the Senate with only a simple majority. However, in a similar fashion, the parliamentarian prevented both Democrats and Republicans from trying to pass major policy changes using the parliamentary procedure. For instance, MacDonough ruled in February that the Senate cannot use reconciliation to raise the minimum wage to $15 per hour.

The Senate parliamentarian limited the scope of Republicans’ Affordable Care Act (ACA), or Obamacare, repeal efforts because they could not change Obamacare’s insurance regulations. Republicans were mostly limited to changing the ACA’s Medicaid expansion, as well as the ACA’s individual and corporate mandate.

Senate conservatives cheered the parliamentarian’s decision, believing that it would restrain Democrats’ radical push to grant amnesty and subvert the will of the American people, who do not want amnesty, according to recent polls.

“Not only do Americans oppose blanket amnesty, they want a secure border. Democrat efforts to pass radical immigration policies using a budget procedure run contrary to the will of the American people. They are also contrary to the longstanding rules of the Senate,” Sen. Cynthia Lummis (R-WY) told Breitbart News.

Sen. Marsha Blackburn (R-TN) said in an exclusive statement to Breitbart News, “The radical left is so intent on passing amnesty for illegal immigrants that they want to throw the rules out the window to get it done.”

Sen. Steve Daines (R-MT) told Breitbart News, “The fact that Democrats thought it was a good idea to try and include amnesty for illegal immigrants in their reckless tax and spending spree in the midst of President Biden’s terrible southern border crisis is baffling. I’m glad to see their partisan proposal to further their far-left agenda shut down.”

The nonpartisan Senate Parliamentarian has ruled that Dems’ mass amnesty plan can’t be included in a budget bill. Their tax-and-spend spree remains dangerous for our economy, but on immigration, hopefully Dems will now focus on the massive border crisis they’ve created & ignored.

The nonpartisan Senate Parliamentarian has ruled that Dems’ mass amnesty plan can’t be included in a budget bill. Their tax-and-spend spree remains dangerous for our economy, but on immigration, hopefully Dems will now focus on the massive border crisis they’ve created & ignored. https://t.co/n0xyccyOb0

The parliamentarian’s ruling also has wider implications for the prospect of Congress passing an amnesty for millions of illegal aliens. Democrats would likely not try to pass an amnesty ahead of a pivotal election year. Democrats have a one-member majority in the Senate and a historically slim majority in the House. If Republicans take back the House during the 2022 midterm elections, a potential Speaker Kevin McCarthy (R-CA) could block an amnesty President Joe Biden or any congressional Democrats try to pass. Effectively, this could prevent an amnesty push from Democrats to 2024, when Democrats could have the chance of taking back the House.

A senior aide for a conservative Senate Republican told Breitbart News, “This reconciliation effort really is the last chance for Democrats to force amnesty on the American people. They won’t try it in an election year. And Republicans are almost guaranteed to take the House back next November, meaning at that point, we’ll be saved from it. It’s tough to over-emphasize how important it is that Democrats were blocked from making a massive policy change like this in reconciliation, but we’ve gotta keep fighting because they are going to keep looking for ways to get amnesty added.”

Another Senate Republican aide told Breitbart News that Democrats never had the votes to pass an amnesty in the first place, given that vulnerable Senate Democrats such as Sens. Mark Kelly (D-AZ) and Maggie Hassan (D-AZ) are up for reelection in 2022.

“Democrat leadership knows they never had the votes for their amnesty plan in the first place and are happy to use the Senate parliamentarian as a distraction,” the GOP aide said. “Vulnerable members like Mark Kelly and Maggie Hassan, who are going to have close races in 2022, could never vote for this plan. This is all about firing up the left and laying the groundwork to eliminate the filibuster the first chance they get.”