BREAKING NEWS
*Mother of Todd, Julie Chrisley’s Granddaughter Will fight to Regain Custody*Ex-Laker Devean George Says Shaq ‘Did Not S*** In My Shoe,’ Calls Rumor A Lie*Bob McGrath death: Original star of Sesame Street dies aged 90*‘Snoop DeVille’ From 50 Cent’s ‘P.I.M.P.’ Video Up for Sale*Guess Who This Shining Star Turned Into!*Disgruntled Atlanta Hawks Star Trae Young Missed Game Over Spat With Coach Nate McMillan*WATCH: Houston Volleyball Player Dives on Table to Save Ball During NCAA Tournament*PHOTOS– Officers Rescue 3 People from Sinking Car: ‘You All Make Us Proud’*England star Raheem Sterling left out of World Cup win over Senegal after a burglary at his home*‘Yellowstone’ Recap: The Blood Finally Flows*Poll: Near Majority of Republicans Want Less Foreign Aid as Congress Poised to Grant Ukraine $37 Billion*Jewish UFC Fighter to Kanye West: ‘If You’ve Got a Problem with Me or My People, Come See Me, Bro’*USMNT’s World Cup progress has all eyes turned eagerly to 2026: ‘On the way’*Mayim Bialik honors Leslie Jordan after his final episode of ‘Call Me Kat’ airs*Conflicting Reports on Iran Disbanding Morality Police, Hijab Law*Sam Bankman-Fried Dodges on Call to Testify at Maxine Waters’ Request on FTX Collapse*George Clooney, Gladys Knight, U2 Get Kennedy Center Honors from Biden*California, a Free State Since 1850, May Pay $233k in Reparations per Slavery Descendant*‘Emancipation’ Producer Apologizes Over ‘Whipped Peter’ Pic at Premiere*Pro-Life Group in Nebraska Receives Shooting Threat Note Allegedly Signed by ‘Jane’s Revenge’
Skip to content
October 6, 2022
by MICHAELANTONIO

White people were told to engage in a racial shaming exercise to remind them of their privilege by Wisconsin Democrat Governor Tony Evers’ Department of Public Instruction (DPI) when he was its superintendent.

A document promoted by the Department of Public Instruction, obtained exclusively by Breitbart News, suggested white people “wear a white wristband as a reminder about your privilege.”

Democrat Governor Tony Evers, who is up for reelection, was the Superintendent of the Department of Public Instruction from 2009 to 2019. During his time as Superintendent, the department worked alongside Volunteers in Service to America (VISTA).

Evers spoke highly of VISTA, remarking that Wisconsin was “very fortunate” to have assistance from VISTA volunteers, and that their work was “very important.”

A document titled “Addressing Racial Privilege: A Mental Model for White Anti-Racists,” was distributed at a joint DPI-VISTA training in 2013, while Evers was the Superintendent. The document urged people to engage in a number of anti-white racial shaming exercises, including wearing wristbands as “a reminder about your privilege, and as a personal commitment to explain why you wear the wristband.” 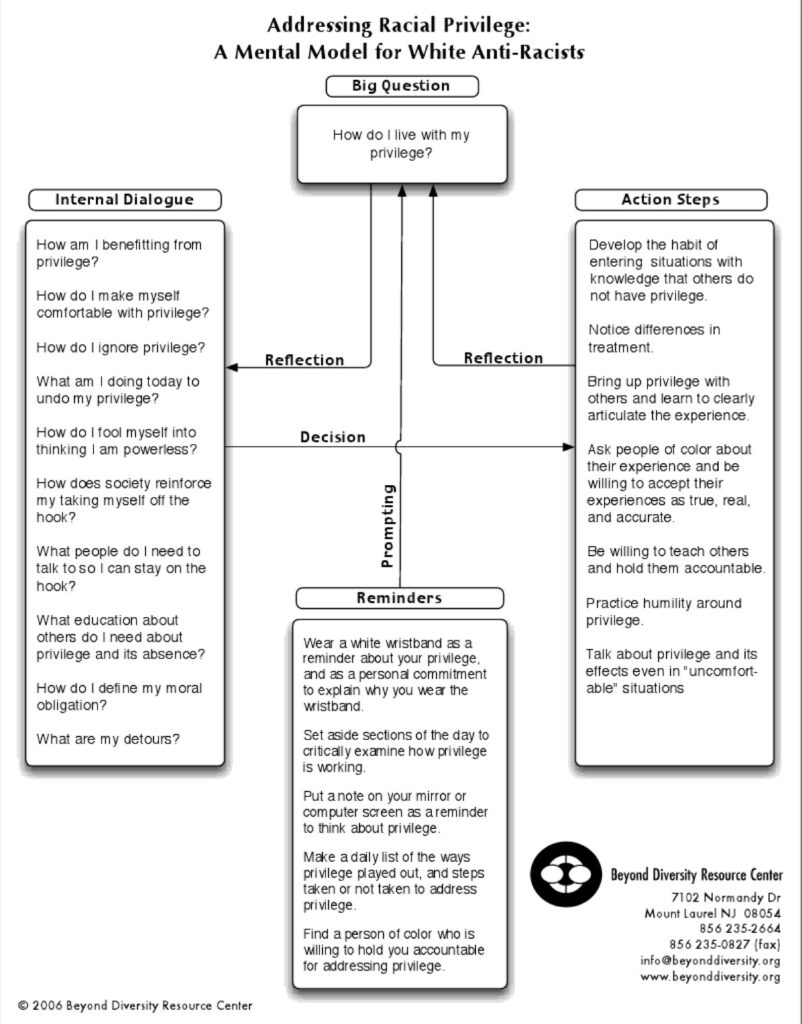 The document also told white people to “find a person of color who is willing to hold you accountable for addressing privilege” and to “make a daily list of the ways privilege played out, and steps taken or not taken to address privilege.”

“Set aside sections of the day to critically examine how privilege is working,” it read. Another section demanded attendees “be willing to teach others and hold them accountable.”

The document asked a number of questions, including “What am I doing today to undo my privilege? and “How do I define my moral obligation?”

All of the questions, demands, and action items were centered around the “big question,” which read “How do I live with my privilege?”

As the Superintendent of Public Instruction, Evers had control over the curriculum of Wisconsin public schools. After initial outcry about the racially charged document, the Wisconsin DPI scrubbed the document from their website.

A section of their website, titled “Power and Privilege,” denies that DPI officials had asked students or school personnel to wear wristbands to atone for their white privilege.

The website does, however, say that after a training session with VISTA volunteers, “​​a packet of ‘additional resources’ was offered by the trainers as the volunteers left. Subsequently, that entire resource packet was posted to the VISTA web site.”

Users who click on the link to the document currently on the website are directed to a page that says, “Misconceptions and misinformation about the document are being spread by an out-of-state entity that has no connection with the public schools in Wisconsin.”

Politifact has stated “DPI was responsible for a flier given to 13 federally paid workers that suggests white people consider wearing the white wristbands.”

Breitbart News contacted the Wisconsin Department of Public Instruction, asking the department if it was “willing to denounce exercises or activities that intend to get white students, volunteers, or personnel to atone or apologize for racial privilege.”

Communications Director Abigail Swetz told Breitbart News, “I assume it was removed because it does not reflect best practices in equity trainings, and as an education agency, we are constantly learning and continue to revise best practices.”

Swetz did not offer any condemnation of such exercises or activities, but rather went on to say, “The Wisconsin Department of Public Instruction strongly supports equity in education, which includes trainings about combatting racism.”

Before becoming the Communications Director of DPI, Swetz was engaged in leftist activism and called herself a “proud queer public school teacher.” Swetz also spoke at the Women’s March in Madison and received the “Teacher of the Year” award from GSafe, a leftist organization that organizes teachers and students to engage in progressive activism.

The guide was produced by the New Jersey-based Beyond Diversity Resource Center, an organization that offers “anti-oppression” training sessions and “diversity climate” studies. The organization even sells a “fight hate” wristband.

The wristband’s description reads “Learning about privilege—the ways society gives people advantages because of their memberships in groups—is just as important as learning about oppression.”

Earlier this year, Evers vetoed a bill that would have prohibited Critical Race Theory from being taught in Wisconsin schools. Evers’s campaign did not respond to a request for comment. Evers is running against Tim Michels, the Trump-endorsed Republican candidate for governor.

Spencer Lindquist is a reporter for Breitbart News. Follow him on Twitter @SpencerLndqst and reach out at slindquist@breitbart.com.