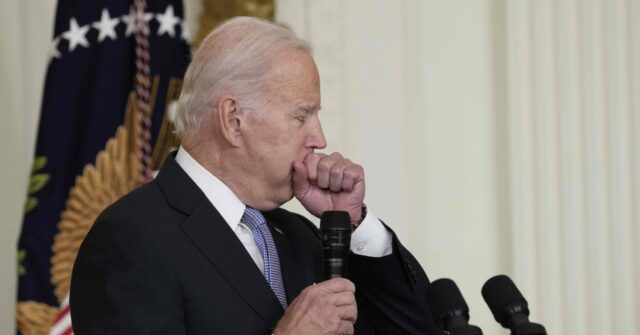 CLAIM: President Joe Biden claimed Friday that he had visited the border before his recent El Paso visit.

VERDICT: MOSTLY FALSE. He was driven past the border once for a few miles, during the 2008 campaign.

President Biden told a gathering of the nation’s mayors on Friday about his recent visit to the U.S.-Mexico border in El Paso, Texas. Biden spend a few hours there, making sure he was photographed near the fence — which he immediately stopped building upon taking office, but evidently knows is a potent symbol of security.

Our problems at the border didn’t arise overnight. And they won’t be solved overnight.

But, we can come together to fix this broken system.

We can secure the border and fix the immigration process to be orderly, fair, safe, and humane. pic.twitter.com/dtP6IAJZMR

Biden blamed Republicans for the migrant crisis at the border, saying that the problem exists because of the GOP’s refusal to pass so-called “comprehensive” immigration reform, which would grant amnesty to millions of illegal aliens already in the country. He did not explain why he had personally reversed many of former President Trump’s successful border policies, or why he is failing to enforce existing laws on immigration.

But he claimed to have visited the border previously, before he had been elected president. The transcript:

The first bill I introduced was a comprehensive reform legislation on immigration. But because of some in the Congress, they refused to consider it. They found it a better issue to campaign on than an issue to solve.

So, we have a choice: They can keep using immigration to try to score political points, or we can help solve the problem. Immigration reform used to be a bipartisan issue. And we can make it that again, in my view.

Biden’s claim to have visited the border previously is misleading, as Breitbart News has explained on previous occasions, such as when Press Secretary Karine Jean-Pierre made the same claim:

In September 2021, then-Press Secretary Jen Psaki responded to a similar question from Doocy by saying that she did not know whether Biden had ever visited the border.

A month later, she said: “There’s been reporting that he did drive through the border when he was on the campaign trail in 2008.” She appeared to be citing a Washington Post article that fact-checked Biden’s claim to have visited the border, and found that “Biden briefly drove past the border while on a campaign swing in 2008” in El Paso, Texas.

On Oct. 17, he held a rally in Mesilla, N.M. The press officer on the trip, David E. Wade, told The Fact Checker that the plane landed at the El Paso airport and then the motorcade took the nearly one-hour drive to the suburb of Las Cruces. The drive took Biden along a route that for a few minutes hugs the border of the United States and Mexico. “For most of us, it was unfamiliar territory,” Wade said, who recalled that some reporters joked about crossing the border during the event.

The claim is therefore false — unless a drive-by visit, in which Biden did not intend to examine the border, can be counted in his favor.

The reality is that prior to his recent visit, Biden had never visited the border in his 50-year political career.

Biden appears to be saying that his constitutional duty to enforce the border depends on Congress agreeing to create laws that give citizenship to the migrants he is allowing to enter the country. It is a familiar form of hostage-taking, in which Democrats threaten to create more future citizens (and potential Democratic voters) unless Republicans agree to make citizens out of those already here, with no guarantees they will be the last.

As for using the issue to score political points, Biden’s former boss, President Barack Obama, was notorious for deferring action on immigration to keep the issue alive to motivate the Democratic base during elections.

When Republicans — such as President Trump — have tried to solve the problem, and have proposed immigration compromises, Democrats have refused because they appear to want to keep the flow of migrants coming.

Joel B. Pollak is Senior Editor-at-Large at Breitbart News and the host of Breitbart News Sunday on Sirius XM Patriot on Sunday evenings from 7 p.m. to 10 p.m. ET (4 p.m. to 7 p.m. PT). He is the author of the new biography, Rhoda: ‘Comrade Kadalie, You Are Out of Order’. He is also the author of the recent e-book, Neither Free nor Fair: The 2020 U.S. Presidential Election. He is a winner of the 2018 Robert Novak Journalism Alumni Fellowship. Follow him on Twitter at @joelpollak.