Former President Barack Obama mocked the idea of a gas tax holiday as nothing more than a gimmick while on the campaign trail in 2008 — an idea that President Joe Biden’s White House endorsed on Wednesday.

“I know that we’re having a debate right now about the gas tax holiday. I know how brutal this is on folks right now, and I know they need relief, which is why I’ve offered a middle class tax cut for every American, $1,000 for working families so that they can deal not only with rising gas prices, but rising health care costs and rising grocery costs,” Obama said on the campaign trail 14 years ago before mocking a gas tax holiday.

“But for us to suggest that 30 cents a day for three months is real relief, that that’s a real energy policy, means that we are not tackling the problem that has to be tackled,” he said.

“We are offering gimmicks when we’re offering the same thing that John McCain is offering on the cheap,” he continued. “That means we’re not presenting a truthful response to the challenges that we face in America. We can do better than that this time.”

“For us to suggest 30 cents a day for three months is real relief, that that’s a real energy policy, means that we are not tackling the problem that has to be tackled.” pic.twitter.com/vUziTflOnb

Harvard economist Jason Furman, who was a top economic adviser to Obama, explained on Twitter that most of a gas tax cut would wind up in the pockets of oil refiners instead of consumers.

“The price of gas is up dramatically around the world, and by almost $2 per gallon in America, since Putin began amassing troops on the border of Ukraine,” a press release from the White House states. Notably, just 11 percent of Americans blame Russian President Vladimir Putin for the rise in gas prices, while most blame Biden himself.

President Biden understands that high gas prices pose a significant challenge for working families. That’s why he has taken action in recent months to boost the supply of oil and gas, including an historic release from the Strategic Petroleum Reserve, and encouraging oil companies and refiners to boost capacity and output to get more supply on the market.

Notably, there was no such note that Biden took immediate actions to strip America’s energy independence — from canceling the Keystone Pipeline and oil and gas leases to rejoining the Paris Climate Accord.

According to the release, the federal government taxes 18 cents per gallon for regular gas and 24 cents for diesel. The White House hopes to suspend those taxes through September “to give Americans a little extra breathing room as they deal with the effects of Putin’s war in Ukraine.” 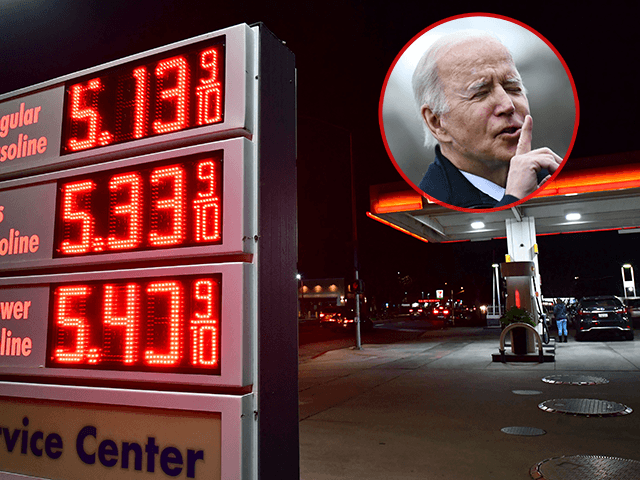 However, gas prices were already on the rise far before Russia’s invasion of Ukraine. As of Wednesday, gas prices were $2.575 higher than they were on former President Trump’s last full day in office. Prices were $2.38 on January 19, 2021 and stand at $4.955 on Wednesday after hitting a record high of $5.016 last week.

“The gall of President Biden and Senate Democrats is staggering. Pushing for a gas tax suspension amid the current crisis is similar to blowing a hole in the side of a ship and proposing to put a Band-Aid on it,” NRSC spokesman T.W. Arrighi said in a statement.

“It’s insanity at a near-comedic level and the American people aren’t buying it. Democrats created this crisis by their actions and disdain for large swaths of American energy production,” Arrighi added. “We are poorer and less safe because of Joe Biden and Senate Democrats.”