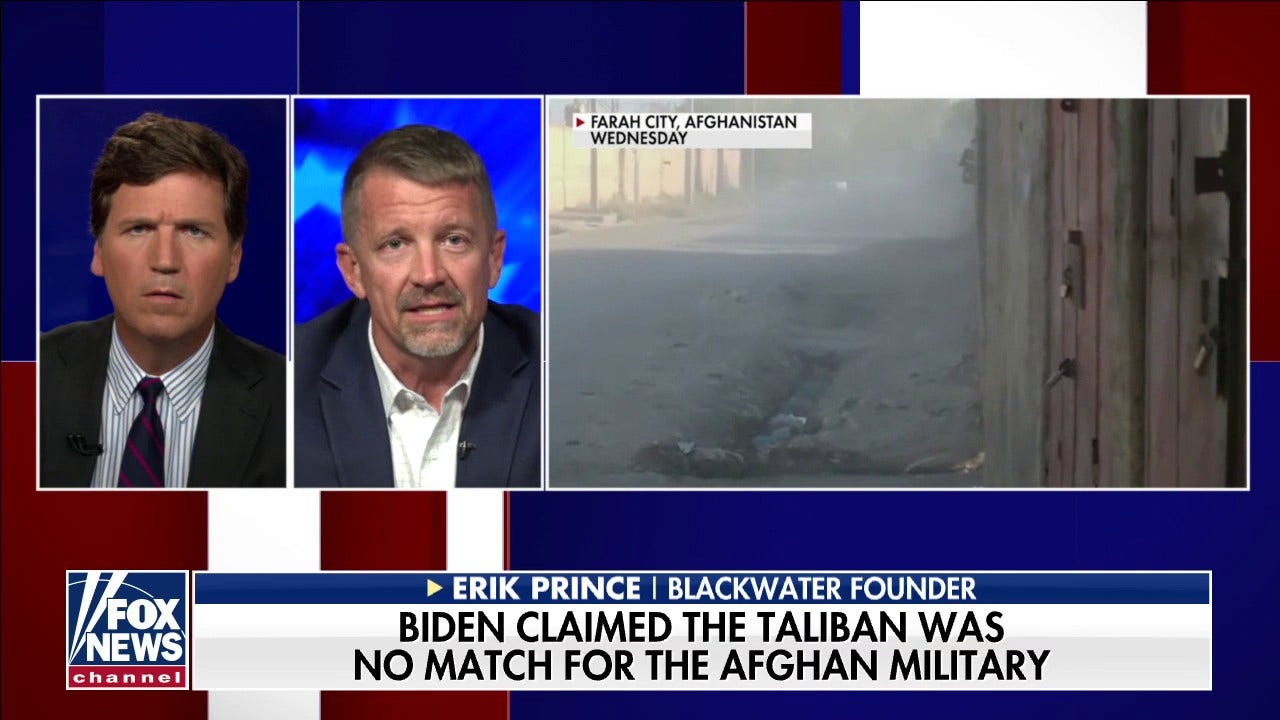 Blackwater founder Erik Prince condemned the potential collapse of Afghanistan, following orders by the Biden administration for a troop withdrawal by the end of the month, saying the Taliban’s increasing resurgence is the product of 20 years of failed military policy.

Prince, a retired Navy SEAL who served in the Middle East, told “Tucker Carlson Tonight” that “half-baked politicians” in Washington are to blame for what is happening in Afghanistan.

“It’s the same collection of national security elites in Washington that has failed for that entire 20 years. They took what was a brilliant victory by special operations and the CIA and the first six months after 9/11 and turned it into a massive failed nation-building exercise,” Prince said.

Since about 2002, Prince said, U.S. overtures in Afghanistan have been reminiscent of a Star Trek forum:

“It’s largely been like a ‘Star Trek’ cosplay convention where they just sit and talk to each other and delude themselves into thinking they are making progress – and it’s been the same nonsense, and they’ve refused to think about any other ways to solve this problem,” he said.

Prince said that officials from the Bush administration forward have continued to ignore that Afghanistan is not a traditional country and instead tried to install “central government Nirvana” in Kabul, and mimic Western democracy.

In doing so, the Pentagon engineered a replication of the U.S. military in that country, while ending up being beaten by a much less organized foe.

“They’re the most expensive military in the world… and we have been beaten by weapons that were designed in the 1940s carried by largely illiterate goat-herders,” he said. If there is any shame in Washington, there should be a lot of people resigning and if not, they should be fired.”

“The really disgusting thing is the people that made those decisions in the comfort of their Beltway offices don’t have to live with a lost limbs, lives, marriages, the real damage,” Prince continued.

He went on to compare the potential collapse of the country to the end of the Vietnam War, explaining that the U.S. failure to score a victory led to 30 million casualties across southeast Asia in the time since.

“Trust me, this problem will spread to that region,” he said of the Middle East in Afghanistan’s case.

“The Taliban never disavowed Al Qaeda, the cosplay diplomacy that’s been going on in the United States thinking they’re going to make a deal with the Taliban – whether it’s the Trump Administration, Obama administration or Biden administration, the same knuckleheads getting really bad advice at the national security level have gotten away with the same failed approach.”

“Joe Biden told us is that in Afghanistan, we can rely on the Afghan security forces to keep the savages at bay. They’ve gotten billions in U.S. tax dollars over 20 years and by the way, they were trained by Mark Milley,” Carlson said. “He’s now the chairman of the joint chiefs of staff so we are good, don’t worry. Last month, let his personal stamp of approval to the Afghan security forces.”

Carlson played a clip of the general saying the Afghan forces have the capacity to defend their country, and his statement that a Taliban resurgence is not a “foregone conclusion.”

“The future of Afghanistan is squarely in the hands of the Afghan people and there are a range of possible outcomes in Afghanistan, and I want to emphasize repeatedly … a negative outcome: a Taliban automatic military takeover is not a foregone conclusion,” Milley said in the video.