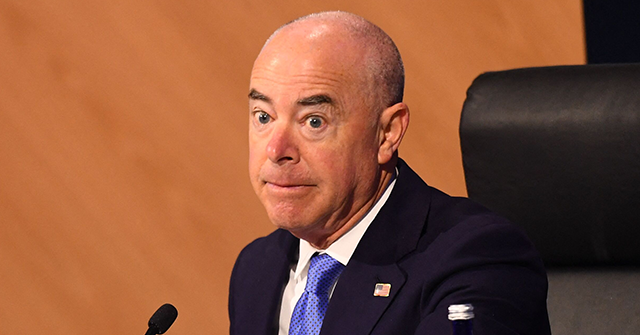 President Joe Biden’s border chief should be investigated — and perhaps impeached — because he refuses to enforce Congress’ immigration laws, GOP legislators said at a Tuesday press conference at the border.

Mayorkas is faced with several GOP-backed lawsuits that charge him with refusing to enforce the laws. The suits say he violates the legal duty to detain asylum seekers until their pleas are decided, and he allows hundreds of thousands of migrants through the “immigration parole” door designed for a few emergency cases.

The Supreme Court is expected to soon hear the asylum case.

Mayorkas is also being sued for giving work permits to foreign workers who enrol at U.S. universities.

The GOP’s investigation of  Mayorkas’ compliance with the law has the “potential to just be a shiny object to distract their constituents,” said Mark Krikorian, the director of the Center for Immigration Studies. But, he added:

Shining a light on the widespread disregard of the law by Biden’s DHS serves an important function. Maybe we can get the issue of immigration parole and its abuse into the broader discussion. It’s a key problem and it is one of the important ways this administration is creating a parallel, off-the-books [“safe, orderly and humane”] immigration system –[and is]  just letting in people even though they have no right to be let into the United States. I hope they don’t use [this issue] as a way of mollifying angry constituents without actually doing anything else.

Since early 2021, Mayorkas has allowed at least 2.1 million economic migrants across the southern border, alongside roughly 600,000 border-jumping “getaways.”

The Mayorkas inflow adds up to roughly seven migrants for every 19 American births.

Mayorkas is a pro-migration zealot. But he is also a clever, hard-nosed lawyer who has smiled through many half-hearted questions from cautious GOP legislators while declaring that he is following the complex immigration laws.

His agency announced late Tuesday that he has no plan to resign:

Secretary Mayorkas is proud to advance the noble mission of this department, support its extraordinary workforce, and serve the American people. He has no plans to resign. The department will continue our work, to enforce our laws and secure our border, while building a safe, orderly, and humane immigration system.

Mayorkas’s phrase — “safe, orderly, and humane” — is PR cover for his taxpayer-funded, investor-backed, covert network of migrant routes to the jobs and homes needed by Americans.

The GOP leaders pressed their legal arguments at their press conference in Texas.

“His deliberate suspensions of our laws have proved deadly — fentanyl is now flowing in in record amounts,” said Rep. Kevin McCarthy (R-CA), the likely House Speaker in 2023. “He has blocked ICE [and the] Border Patrol from enforcing our laws while vilifying them at the same time.”

“The southern border barely exists anymore [because] the Border Patrol isn’t allowed to do their job,” said Rep. Brian Babin (R-TX). “This administration has tied their hands so tight that catch-and-release sometimes is their only option at this point,” he said.

“If you simply send people back … If simply you stopped tying the hands of ICE, people will stop coming,” McCarthy said.

Mayorkas cannot say for certain that none of the 42 illegal aliens on the FBI Terrorism Watch List and No-Fly List, apprehended at the United States-Mexico border last year, were released into American communities. https://t.co/eyDkBZYG5M

A reporter asked McCarthy what laws Mayorkas may have violated. McCarthy replied, “withholding ICE from doing their job, not following through on what the laws or the books are today.”

“We never do impeachment for political purposes — we’re having an investigation,” McCarthy added.
But the GOP leaders offered more than a legal argument for impeachment — they stressed the huge death toll of Americans and migrants enabled or caused by Mayorkas’ semi-open border policies

“This is their crisis,” said Babin, adding:

They own it. And there is nothing humane or compassionate about it at all. Migrants are dying, border agents are dying, Texas Army National Guard members are dying, and the American citizens are dying. The entire situation is devastating and Biden and his administration simply must be stopped.

“Today, 300 Americans will be poisoned and die,” from illegal drugs smuggled across the border, said McCarthy, adding:

Tomorrow, 300 more. It is the equivalent of an airline crashing each and every day in America. But again, [Mayorkas] does nothing. If an airline crash three days in a row the entire nation would say we have a real challenge. We have a crisis. We have a disaster. We have to do something about it. But he continues to lie to the American public … His actions have produced the greatest wave of illegal immigration in recorded history. Our country may never recover from Secretary Mayorkas’ dereliction of duty. This is why today I am calling on the Secretary to resign. He cannot and must not remain in that position. If Secretary Mayorkas does not resign, House Republicans will investigate every order, every action, and every failure will determine whether we can begin an impeachment inquiry.

The refusal by @SecMayorkas to secure the border is not a policy disagreement – it is a refusal to do his duty at multiple levels… resulting in the death of Americans, migrants, & Border Patrol agents driven to suicide. And then he lies about it all. So, yeah… #ImpeachMayorkas

Thousands of migrants have been killed by Mayorkas’ migration, and many more — including many teenage children — have been delivered into low-wage, stoop-labor jobs that can be done by well-paid U.S. workers and their machines. Some GOP legislators have spotlighted those pre-modern policies, but the establishment’s media protects Biden’s reputation from shame.

McCarthy needs to tread carefully. If elected HosueSpeaker in January, he will lead a narrow GOP majority which includes business-first establishment Republicans and American-first populist Republicans.

The GOP’s business donors support Mayorkas’ migration and strongly pressure GOP legislators to not say anything about the pocketbook impact on American families.

The business donors prefer the debate be focused on crime, chaos, and drugs while they quietly demand that GOP legislators support migration expansions pushed by Democrats.

Unsurprisingly, Democrats and their allies in the establishment media have ignored and downplayed the evidence of Mayorkas’ lawbreaking, and his death toll.