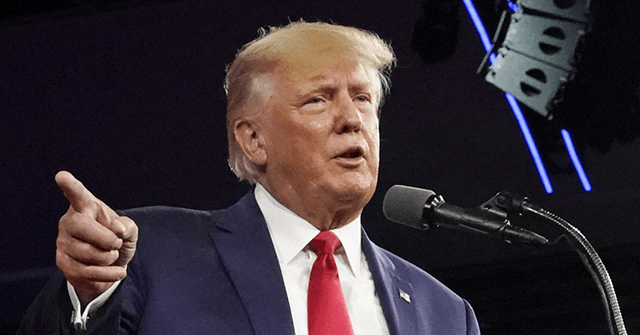 “The FBI is currently raiding President Trump home at Mar-a-Lago. They have declared war on 74 MILLION Americans,” he wrote in a social media post:

The FBI is currently raiding President Trump home at Mar-a-Lago.

They have declared war on 74 MILLION Americans.

“These are dark times for our Nation,” Trump said in a statement as his home was “currently under siege, raided, and occupied” by FBI agents. He added, “Nothing like this has ever happened to a President of the United States before.”

After working and cooperating with the relevant Government agencies, this unannounced raid on my home was not necessary or appropriate. It is prosecutorial misconduct, the weaponization of the Justice System, and an attack by Radical Left Democrats who desperately don’t want me to run for President in 2024, especially based on recent polls, and who will likewise do anything to stop Republicans and Conservatives in the upcoming Midterm Elections. Such an assault could only take place in broken, Third-World Countries, Sadly, America has now become one of those Countries, corrupt at a level not seen before. They even broke into my safe! What is the difference between this and Watergate, where operatives broke into the Democrat National Committee? Here, in reverse, Democrats broke into the home of the 45th President of the United States.

Meanwhile, President Joe Biden’s staffers claimed they had no knowledge of the raid, Breitbart News reported.

“No advance knowledge. Some learned from old media some from social media,” a senior White House official said when asked about the incident.

“The raid is supposed to be a last resort,” he noted. “But this administration has used the weaponization of the justice system against its political enemies. It has arrested people, denied them bail, put them in handcuffs – used all kinds of techniques that are not usually applied to American citizens. I just hope this raid has the justification. If it doesn’t have the justification, the materials seized in it will be suppressed.”