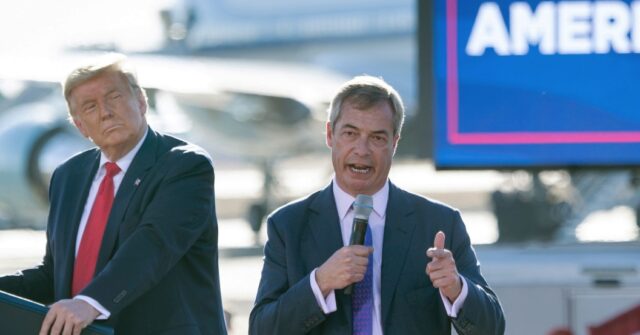 Brexit firebrand Nigel Farage has expressed his ‘shock’ at what he called the ‘appalling’ raid on former President Donald Trump’s home in Mar-a-Lago yesterday.

Occurring on Monday, FBI agents reportedly entered the former President’s home and forcibly gained access to a safe in the residence, with Trump himself lamenting that “nothing like this has ever happened to a President of the United States before”.

This is a sentiment that Farage has expressed emphatic agreement with, with the GB News commentator saying that the raid shows that the American establishment is “very, very scared of Donald Trump”.

I will be on @GBNEWS at 9.20am to respond to the appalling raid on Mar-a-Lago. Is America becoming a Banana Republic?

“No former president has ever been treated like this,” Farage said during a Tuesday morning interview with GB News, with the former Brexit Party leader emphasising that even former disgraced President Richard Nixon, who was caught spying on his Democrat colleagues, was never this harshly treated.

“They’re scared he’s going to come back, his party will storm the midterms, and he’s coming back to the White House in ’24,” he continued.

Farage also ridiculed the very justification for the FBI raid, with the long-time ally of President Trump claiming that — while there was no conspiracy surrounding the events of January 6 and, by extension, no documents in existence detailing such a conspiracy — the idea that any sensitive documents that would be stored at Trump’s home is laughable.

“Do you honestly think that, if he had taken documents, that they’d be stored at Mar-a-Lago?” he laughed. “I mean, it’s so ridiculous to be totally absurd!”

Donald Trump Jr. reacted to the FBI raid at of Mar-A-Lago, saying that the Democrats are “openly targeting their political enemies.” https://t.co/C5IOasb3so

On a more serious note, Farage also expressed concern that the raid could prompt a violent backlash from a deeply divided American public that has gotten used to the idea that rioting and street violence has a place in its democracy.

“The danger, and the worry, is that the divisions in America are so great, the preponderance we have seen towards street violence is growing, and I just worry that it could provoke some sort of violent reaction,” he said.

Nevertheless, the architect behind Britain’s exit from the EU ultimately concluded that the raid will play into the hands of both the Republicans and Donald Trump himself during the coming elections, with Farage saying that many members of the general public will be greatly concerned by the nature of the FBI’s actions.

“To any fair-minded person, they’re going to say ‘how on earth can this be happening in 21st century America? What have we become? A banana republic?” he said.

“In terms of the electorate and fair-minded people, it will play very heavily in Donald Trump’s favour.”