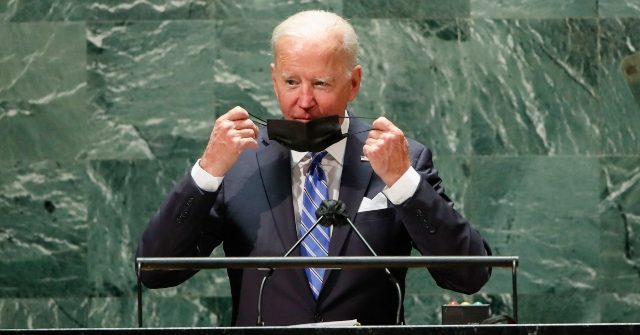 President Joe Biden boasted Tuesday that under his leadership the United States had restored funding to the World Health Organization (W.H.O.) — despite the global organization’s failures during the coronavirus pandemic.

“We are re-engaged at the World Health Organization and working in close partnership with COVAX to deliver life-saving vaccines around the world,” Biden said during his first speech as president to the United Nations General Assembly.

In January, Biden reversed a 2020 decision by former President Donald Trump to withdraw from the organization citing its deference to China during the pandemic.

In January 2020, the W.H.O. echoed Chinese propaganda on the virus, saying there was “no clear evidence of human-to-human transmission” even as the virus was savaging China.

Preliminary investigations conducted by the Chinese authorities have found no clear evidence of human-to-human transmission of the novel #coronavirus (2019-nCoV) identified in #Wuhan, #China🇳. pic.twitter.com/Fnl5P877VG

In February 2020, the W.H.O. indicated that the majority of the spread of the virus was only from people “showing significant symptoms.”

Q: Can the #2019nCoV be transmitted from person to person?
A: https://t.co/j6HsqP9iJb pic.twitter.com/r0Ls9mdOOs

W.H.O. Director Tedros Adhanom Ghebreyesus was reportedly “stubborn” and “naive” about praising China even while criticizing the United States for issuing a travel ban on travelers from China in the early days of the pandemic.

The W.H.O. even praised China for their transparency on the coronavirus, even while the Chinese government was actively working to censor information and news about the spread of the virus.

The W.H.O was also reluctant to declare the coronavirus a public health emergency in January and finally a pandemic in March, citing concerns of “unreasonable fear” as a result of acting too quickly.

China continues to flatly reject W.H.O. requests for information about the source of the virus.