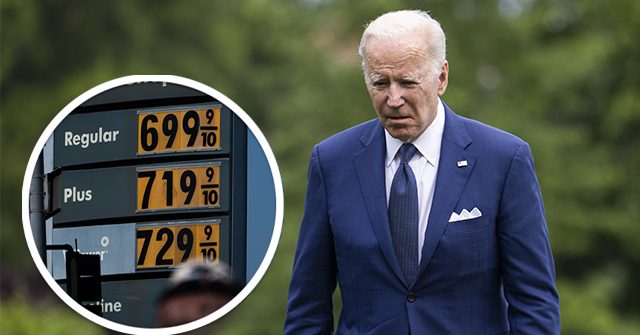 “To the companies running gas stations and setting those prices at the pump, this is a time of war, global peril, Ukraine,” he said.

The president spoke about the record high gas prices occurring during his administration during a speech on his imitation White House set across the street.

“These are not normal times. Bring down the price you are charging at the pump to reflect the cost you are paying for the product,” Biden said. “Do it now. Do it today.”

“Some haven’t reduced prices at all,” he complained.

Biden called for congress to pass a federal gas tax holiday and urged states to do so as well, noting that it could help reduce prices.

“I’m doing my part,” he said defensively. “I want the congress, states, the industry to do their part as well.”

The president argued that the high cost of gas was the price for defending democracy in Ukraine.

“We could have turned a blind eye to Putin’s murderous ways and the price of gas wouldn’t have spiked the way it has. I believe that would have been wrong. I believed then and believe now the free world had no choice,” Biden says.

He appeared rankled by Republicans blaming him and his administration’s policies for the high cost of gas, suggesting that they did not care about Ukraine.

“Are you saying we would rather have low gas prices in America than Putin’s iron first in Europe?” he asked.

A recent survey showed that only 11 percent of Americans blame Putin for high gas prices, while 52 percent blame Biden.