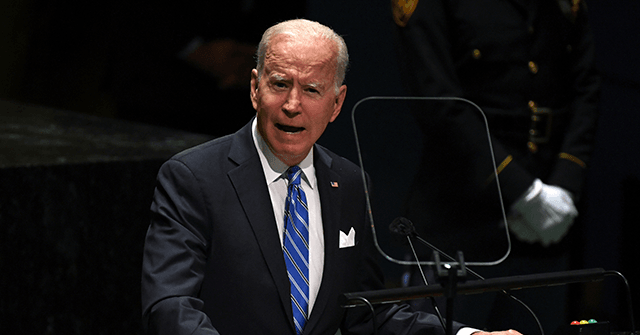 President Joe Biden indicated he was willing to work with China, promising not to embark on a “Cold War” with the communist dictatorship during his speech to the general assembly of the United Nations on Tuesday.

“We’re not seeking, say it again, we are not seeking a new cold war or a world divided into rigid blocks,” Biden said in a speech that heavily alluded to issues with China, without directly naming the country.

United Nations Secretary-General Antonio Guterres has warned of a potential new cold war between China and the United States and implored the countries to repair their “completely dysfunctional” relationship. pic.twitter.com/9wEv6JcMGq

The president promoted a “new era of diplomacy,” in his first speech as president to the United Nations General Assembly, indicating he was willing to partner with China on global issues such as climate change and the coronavirus pandemic.

“The United States is ready to work with any nation that steps up and pursues peaceful resolution to shared challenges even if we have intense disagreements in other areas,” he said.

Biden called for all nations to work together to fight the coronavirus pandemic.

“We must choose to do more than we think we can do alone so that we accomplish what we must together,” he said. “And ending this pandemic and making sure we’re better prepared for the next one.”

At no point did Biden address the Chinese origin of the coronavirus or the communist government’s refusal to allow transparency into the investigation.

Biden hinted at some areas of concern with China, promoting the concept of “freedom of navigation” generally and promising to “oppose attempts by stronger countries that dominate weaker ones.” The president also mentioned the priority of religious freedom, specifically referring to the Xinjiang province of China where mostly Muslim minorities are held in detention camps.

But ultimately, Biden appeared to offer an olive branch to China.

His speech marked a significant departure from former President Donald Trump’s speech to the United Nations in 2020, where he called world nations to hold China accountable for the coronavirus and condemned its abuses on human rights, the environment, and global trade.