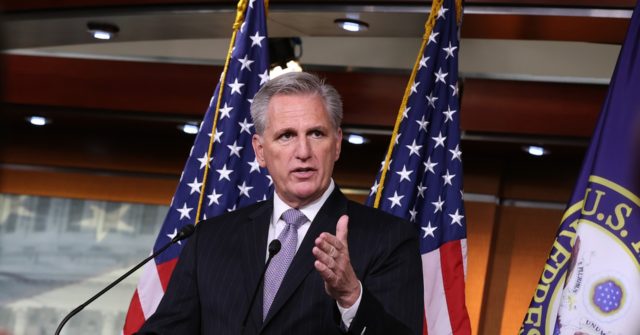 “On immigration: McCarthy reiterated to Axios his recent pledge to Breitbart’s Matt Boyle — that he’ll not consider any legislation offering legal status to undocumented immigrants, preemptively ruling out comprehensive immigration reform,” said the January 13 report in Axios, which is headlined “McCarthy’s plot to build the House of Trump.”

On issue after issue, he’s laying down markers continuing the dramatic transformation of GOP leadership since 2017.

Where Ryan focused on tax cuts and fostered friendly relations with corporate America, McCarthy is publicly excoriating the Chamber of Commerce, threatening crippling regulations on social media companies and planning to inject an anti-Chinese Communist Party (CCP) mindset into the work of every congressional committee possible.

“We’re going to be more aggressive than in the past,” McCarthy told Axios.

“We’re not going to sit back and just take a ‘no’ for an answer…it can’t be business as usual.”

The article even uses the “comprehensive immigration reform” term, which is the establishment’s poll-tested euphemism for a cheap-labor, low productivity economy of consumers instead of high-tech producers.

But the Axios report ignores the many polls showing how McCarthy’s populist promises are very popular among the GOP traditional voters and the rising wave of Latino voters.

Many polls show that Americans strongly oppose labor migration even as they also want to like immigrants and to allow some immigration.

But the bipartisan federal government has exploited the public’s decency since 1990 to extract tens of millions of migrants from poor countries to boost U.S. businesses as workers, consumers, and renters.

That economic strategy is harmful to ordinary Americans: It cuts their career opportunities and their wages while it also raises their housing costs.

The extraction-migration policy also widens regional wealth gaps nationwide. McCarthy’s Bakersfield district in inland California, for example, has largely been ignored by job-creating investors. The investors can ignore Bakersfield and its job-seekers because they use the government-provided supply of migrants and foreign contract workers to staff new businesses near their coastal homes.

Unsurprisingly, a wide variety of little-publicized polls do show deep and broad opposition to labor migration and the inflow of temporary contract workers into jobs sought by young U.S. graduates.

This opposition is growing, anti-establishment, multiracial, cross-sex, non-racist, class-based,  bipartisan, rational, persistent, and recognizes the solidarity that Americans owe to each other.