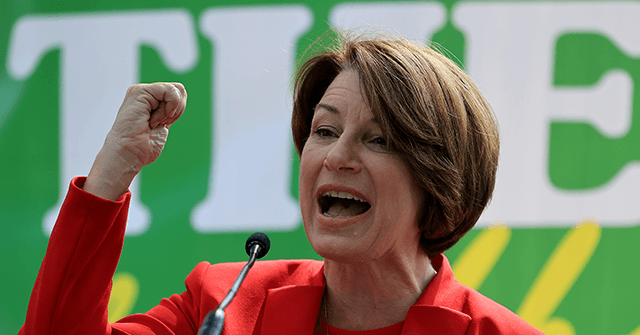 On Wednesday’s broadcast of CNN’s “AC360,” Sen. Amy Klobuchar (D-MN) argued that the Senate gun legislation “paves the way in the future to look at” other gun control provisions.

Host Anderson Cooper asked, “Well, there [are] probably a lot of people who wanted this to — obviously, you said you wanted this to go farther in terms of gun safety or gun control. What do you say to those who say that this doesn’t go far enough and that this may make it harder to try to get further changes in the future?”

Klobuchar responded, “We have worked on this for decades. And after Parkland, I sat across from Donald Trump at the White House, along with a number of senators, he said he was going to do something about background checks. I still have the piece of paper, eight times, nine times, he said it…nothing happened. After Sandy Hook, nothing happened. And when you talk to the families who have been working on this for so long, they understand how difficult this has been, how disappointing this has been. So, to start with something that’s going to save lives, even if a particular provision wouldn’t have saved their own babies’ lives, that is an act of love and generosity of spirit that you hear from the families of those that have lost loved ones. That’s why we’re moving ahead. And I think it actually paves the way in the future to look at some of these other provisions. But if you do nothing and you just go home, then we’ve got nothing. And that’s why it’s so important to pass this bill on a bipartisan basis.”