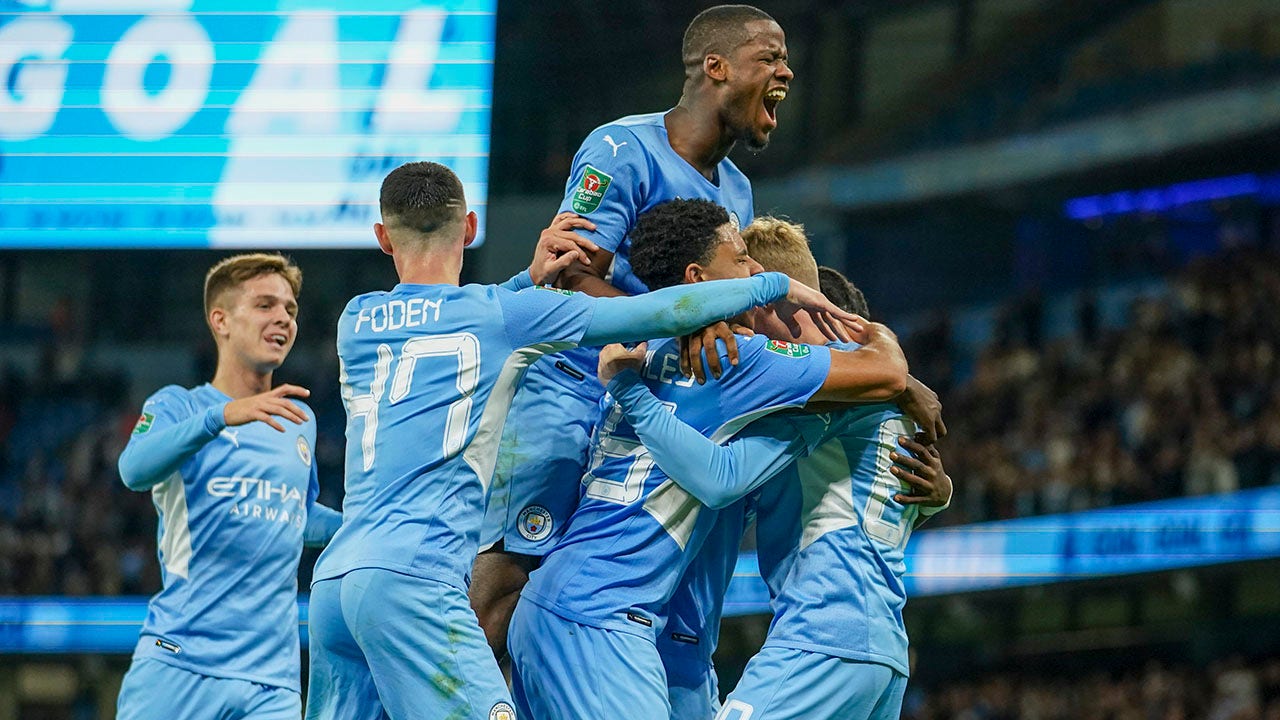 Bidding to win the English League Cup for a fifth straight season, Manchester City’s players fell behind during a game in the competition for the first time in nearly four years on Tuesday.

They immediately put that right.

City responded to conceding a surprise opening goal at home to third-tier Wycombe Wanderers in the 22nd minute by scoring three times before halftime and eventually easing to a 6-1 win. Among the scorers for City was Kevin De Bruyne as the Belgium star builds up his match fitness after injuries.

Pep Guardiola’s team last tasted defeat in the League Cup in October 2016, and hasn’t trailed since the first leg of the semifinals in January 2018.

Like City, Liverpool used the competition to hand starts to fringe players and senior debuts to a number of its promising youngsters — including a 16-year-old in Kaide Gordon — and they enjoyed a 3-0 victory at fellow Premier League team Norwich. Japan forward Takumi Minamino started and finished the scoring.

Liverpool and City are tied on a record eight League Cup titles. Six of City’s have come in the eight previous seasons.

Everton was one of three Premier League teams taken to a penalty shootout by lower-league opposition, and fell to an 8-7 loss to second-tier Queens Park Rangers following a 2-2 draw after 90 minutes. Southampton and Leeds fared better to overcome teams who were in the top flight last season — Sheffield United and Fulham, respectively.

Guardiola fielded an interesting team, with a back four of academy graduates — CJ Egan-Riley, Luke Mbete, Finley Burns and Josh Wilson-Esbrand — getting first senior starts in front of American goalkeeper Zack Steffen, making his first appearance since recovering from the coronavirus.

Thankfully for Guardiola, he had a stellar cast in the attacking positions and he needed them to deliver after Brandon Hanlan put Wycombe ahead in front of a stunned home crowd at Etihad Stadium.

Minamino made his first appearance for Liverpool after being an unused substitute in four matches this season, and had an instant impact.

Barely three minutes had been played at Carrow Road when he latched onto a header down from Divock Origi at a corner and swiveled to shoot through the goalkeeper’s legs.

Liverpool’s backup goalkeeper, Caoimhin Kelleher, saved a penalty before Origi headed in the second goal, and Minamino poked in a third from close range.

Liverpool extended its unbeaten run against Norwich to 16 games in all competitions. It was also 3-0 between the teams in the opening round of the Premier League.