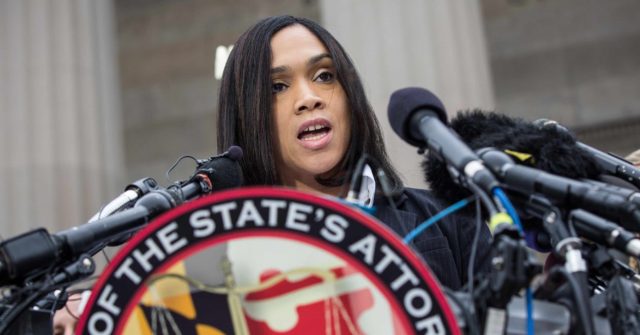 Left-wing Baltimore, Maryland prosecutor Marilyn Mosby, an early figure in the Black Lives Matter movement, was indicted Thursday on federal charges for fraudulent mortgage applications on homes in the Republican-run State of Florida.

Mosby gained notoriety in 2015 when she prosecuted six police officers for the death of Freddy Gray, an African American man, in police custody. She announced the prosecution as the city was facing protest by Black Lives Matter, and riots. Critics said she had been too quick to charge the officers.

The left celebrated her; Hollywood embraced her, and the late artist formerly known as Prince invited her onstage with him. But the prosecutions were sloppy, the officers were soon acquitted, and critics began to call for her disbarment. (The officers then sued her, but she had immunity for her actions as a prosecutor.)

Mosby remained in the news, notably demanding in 2021 that the Federal Communications Commission (FCC) censor a local news station for publishing, among other things, a report that she had taken a trip overseas sponsored by a group linked indirectly to left-wing billionaire philanthropist George Soros, who has backed left-wing prosecutors.

The indictment, published by Baltimore NBC affiliate WBAL-11, claims Mosby committed fraud and perjury by taking advantage of the CARES Act, the first coronavirus relief bill, to claim falsely that she qualified for a “coronavirus-related distribution” from her public employee retirement account.

She allegedly received $36,000 that she used for a down payment on a home in Kissimmee, Florida. She also allegedly did not reveal to her lender that she owed tens of thousands to the IRS in back taxes. And she allegedly signed the mortgage knowing she in tended to violate its prohibition on using a management company to run it as a vacation rental.

She then allegedly repeated the fraud to obtain $45,000 from her retirement account for a second home in Long Boat Key, Florida. Once again, she allegedly did not reveal that she owed back taxes to the IRS.

Democrats have mocked Florida for its refusal to impose restrictive coronavirus policies, but many continue to vacation and to invest in the Sunshine State.

The indictment came just a day after a convicted arsonist who was freed by Mosby in a plea agreement told a local news station that he should not have been let out of prison after only six months because it sent the wrong message about crime.