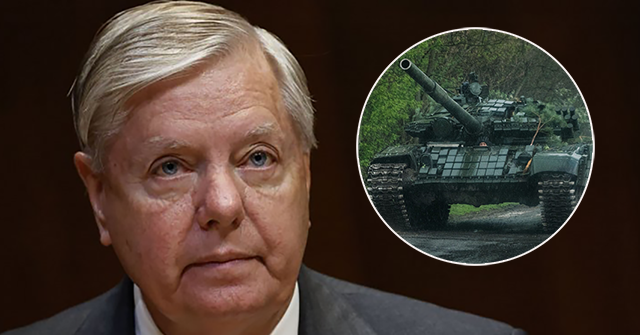 South Carolina Sen. Lindsey Graham (R) urged the west to send tanks to Ukrainian President Volodymyr Zelensky after he traveled to Ukraine over the weekend.

While in Ukraine, the seniors held a press conference in Kyiv where Graham called on Germany and the United States to send tanks to help Zelensky fight back against Russian President Vladimir Putin’s assault on Ukraine.

“All three of us, one Republican and two Democrats, share the same goal — for Ukraine to drive the Russians out of Ukraine. To achieve that goal, the Ukrainian military needs tanks,” Graham said during a press conference after a meeting with Zelensky and other Ukrainian government officials.

Graham speaking in Kyiv: “If Putin gets away with this, there goes Taiwan. If Putin’s successful in Ukraine and isn’t prosecuted under international law, everything we’ve said since WWII becomes a joke. He will continue beyond Ukraine.” pic.twitter.com/qtlSZHpuVh

“I am tired of the shit show surrounding who is going to send tanks and when are they going to send them,” Graham added. “Putin is trying to rewrite the map of Europe by force of arms. World order is at stake.”

Graham’s request came as American and German defense officials have been unable to agree on sending battle tanks to Ukraine. Kyiv has called for NATO and other European countries to send German-made Leopard 2 tanks, but doing so requires Germany’s approval, as Insider’s Jake Epstein previously reported.

After the trip, Graham doubled down on his calls for the west to send tanks to Zelensky in a press release issued Sunday.

Graham said the tanks are “outcome determinative in expelling Russia from Ukraine.”

“I had an incredible trip to Ukraine, meeting with President Zelensky and his team. I am amazed by the determination and capabilities of the Ukrainian military and people to defend their homeland,” Graham said. “The debacle regarding sending tanks to Ukraine must end. It is impossible for Ukraine to expel Russia without tanks.”

“I am hoping Germany and the United States will both send tanks ASAP – opening up other countries’ desire to help Ukraine,” he added. “The tanks are outcome determinative in expelling Russia from Ukraine.”

All three of us, one Republican and two Democrats, share the same goal – for Ukraine to drive the Russians out of Ukraine.

To achieve that goal, the Ukrainian military needs tanks. pic.twitter.com/WsrJBmgvj4

Graham urged Germany and the U.S. to act before next month’s Munich Security Conference.

“The Munich Security Conference – which is the premier national security event of the world – is being held in mid-February. It would be unbelievably embarrassing to have a meeting of the free world in Munich while Ukraine’s military needs haven’t been met,” Graham said.

“All the rhetoric coming out of the Munich Security Conference for decades would ring hollow if the United States, Germany and others do not supply tanks to Ukraine to counter the coming Russian offensive and expel Russia from Ukraine,” Graham concluded.