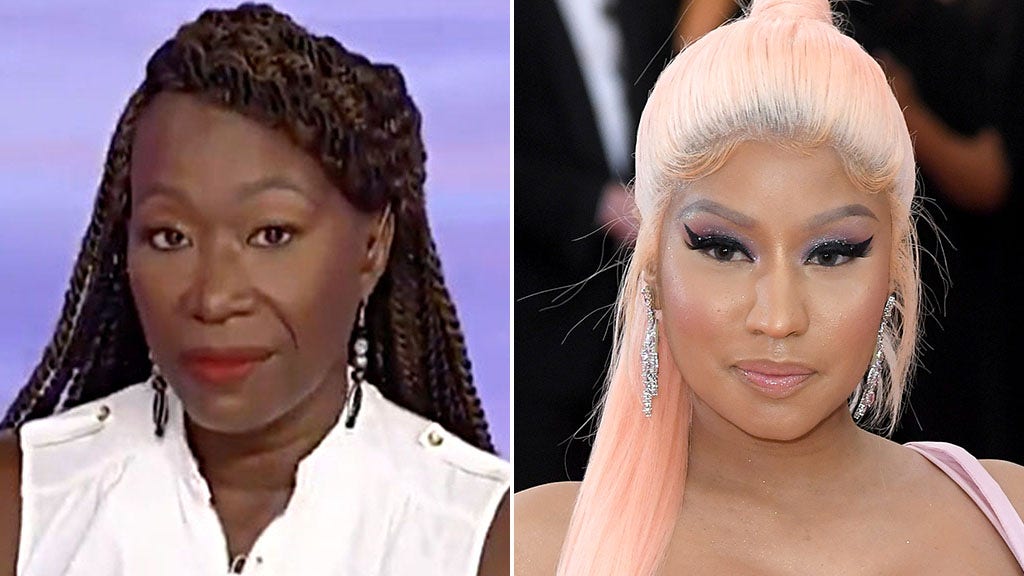 In media news today, MSNBC’s Stephanie Ruhle claims unvaccinated people can just work from home, The New York Times gets accused of ‘catering to the Bidens’ after calling Hunter Biden story ‘unsubstantiated,’ and Kamala Harris is questioned after announcing steps for ‘protecting the vaccinated’

On Monday, Reid scolded Minaj for her tweets expressing skepticism of the vaccine to her nearly 23 million Twitter followers, which prompted a fiery response from the hip-hop artist.

The next day, Reid attempted to lower the temperature and pivot towards a “teachable moment.”

“Essentially, she made public her own vaccine deliberation, which according to trusted friends is a better way to describe vaccine hesitancy, which by the way is not the same thing as refusal,” Reid told her viewers on Tuesday. “But by doing, Nicki also used her social media platform and her 22 million Twitter followers to cast doubt on the vaccine to a heavily Black audience. Needless to say, both my comments and her series of infuriated responses went viral. Clearly, Nicki was not amused, but that’s okay. I feel like every moment is a teachable moment. And this might be the one that illustrates on Twitter in public how hard it is for us to talk to each other on these two sides of the ‘get the vaccine,’ ‘don’t get the vaccine’ aisle.”

Reid acknowledged the “frustration” among the vaccinated and the “anger” among the unvaccinated, but stressed that Black Americans “are not the problem” when it comes to the holdouts, placing blame on Republicans who’ve refused to get vaccinated despite CDC data that shows only 10% of the Black population are fully vaccinated.

“But that’s said, Nicki’s tweets point out a very real thing. There is still a lot of vaccine hesitancy among Black folks,” Reid said. “Everything from just being reluctant or fear of potential side effects all the way up to conspiracy theories about the vaccines that are causing people to refuse to take them or just delay. And that needs to be addressed. Let’s be clear, there are good solid reasons for Black people to have these doubts.”

NICKI MINAJ FIRES BACK AT MSNBC’S JOY REID FOR VACCINE SKEPTICISM SCOLDING: ‘THIRSTY TO DOWN ANOTHER BLACK WOMAN’

She then acknowledged her own vaccine hesitancy, pointing to tweets from September 2020 that read, “The Trump administration has so broken the federal government, and several state governments thanks to sycophant governors like @RonDeSantisFL @BrianKempGA @GregAbbott_TX @KristiNoem etc etc etc … I can’t even conceive how we put it back together and restore any credibility.”

Another one read, “Who on God’s green earth would trust a vaccine by the @US-FDA?”

However, she blamed Trump, who she called a “sociopath president” and accused him of “manipulating the CDC and the FDA” to develop a vaccine by the election.

“So yeah, people like me were really hesitant. But luckily, there have been doctors and scientists who can reassure us who were willing to be reassured that the vaccines, once they came out months later, were indeed safe and had been produced without Trumpist input whether or not they came through the unfortunately-named Operation Warp Speed,” Reid said. “That’s why I got vaccinated months ago. And my immediate family got vaccinated. And yes, I talked to my doctor, something that by the way, lots of Black folks who live in red southern states that have refused to expand Medicaid cannot do because they don’t have a doctor or regular contact with the medical establishment until they get sick.”

“Vaccine hesitancy in the Black community is a real and pressing issue. It’s not something to fight about on Twitter. It’s something to talk about,” Reid added before inviting a medical expert to talk about the vaccine.

Reid may have tuned in to the liberal radio morning show “The Breakfast Club,” which slammed the MSNBC host for shaming Minaj earlier in the day.

“I respect Joy-Ann Reid. She’s the homie, but she missed a real moment to teach yesterday because Nicki never said don’t take the vaccine,” co-host Charlamagne Tha God reacted. “Like, she spoke on why she had vaccine hesitancy but she also in the very next tweet she will probably get vaccinated to go on tour. Like, Joy could have used that moment on her show to correct Nicki on whatever misinformation she put out.”