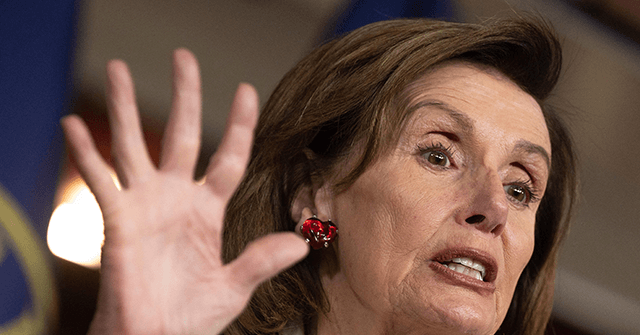 Nancy Pelosi summoned Catholic priests to perform an exorcism of her San Francisco townhouse to rid it of evil spirits, TMZ reported Sunday.

The former Speaker of the House and her daughter, Alexandra, delivered the news in an interview with Maureen Dowd of the New York Times published Saturday.

Pelosi’s daughter: “Over Thanksgiving, she had priests coming, trying to have an exorcism of the house and having prayer services.” https://t.co/DgLLX2nt7E

Alexandra revealed that Nancy had sought the help of priests after her husband Paul was allegedly attacked by a hammer-wielding assailant in October.

“I think that weighed really heavy on her soul. I think she felt really guilty,” Alexandra said.

“I think it really broke her,” she continued. “Over Thanksgiving, she had priests coming, trying to have an exorcism of the house and having prayer services.”

For her part, Pelosi said she thinks it will take three to four months before Paul is “really back to normal.”

The pastor of Pelosi’s parish of St. Vincent de Paul Church, Fr. Arturo Albano, has declared that his staff was not involved in such a rite.

“As far as I know, no exorcism or priest services were performed at her home,” Albano said.

In a public statement, Cordileone said he has reached out to Pelosi “numerous” times to help her understand “the grave evil she is perpetrating, the scandal she is causing, and the danger to her own soul she is risking.”

When these attempts failed, the archbishop said he determined the time had come to make a public declaration “that she is not to be admitted to Holy Communion unless and until she publicly repudiate her support for abortion ‘rights’ and confess and receive absolution for her cooperation in this evil in the sacrament of Penance.”

Pelosi has made a point of describing herself as a “devout” Catholic, despite her wholehearted advocacy of abortion in flagrant opposition to Church teaching.

“She wears her Catholicism on her sleeve while basically sticking her middle finger at the Catholic Church every opportunity she has,” he said.

The Catholic Church teaches that abortion is a grave moral evil and attaches its severest penalty of automatic excommunication for those who participate in it.

“Since the first century the Church has affirmed the moral evil of every procured abortion,” declares the Catechism of the Catholic Church. “This teaching has not changed and remains unchangeable.”

“Direct abortion, that is to say, abortion willed either as an end or a means, is gravely contrary to the moral law,” it adds.