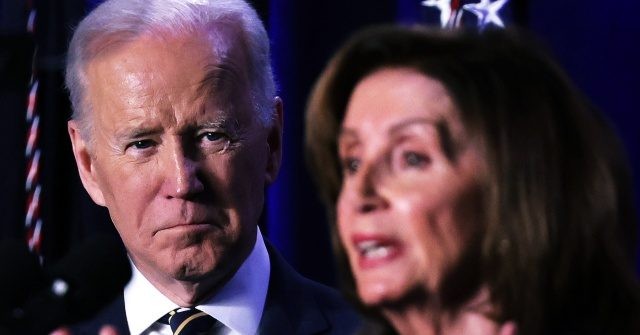 Former House Speaker Nancy Pelosi (D-CA) said during an exhaustive interview with the New York Times that she believes there are “other great candidates” outside of President Joe Biden who could challenge and defeat former President Donald Trump in 2024.

When asked about President Biden, Pelosi spoke highly of him, asserting that he has “done a great job” in office. However, she said it will ultimately be up to him to choose to run again in 2024, which could very well pit him against Trump yet again.

“Is age a positive thing for him? No,” the 82-year-old congresswoman said of 80-year-old Biden, adding that age is “a relative thing.” She also said she believes first lady Jill Biden is “ready” for her husband to run again.

However, surveys show a major lack of enthusiasm for a Biden 2024 bid, particularly among his base. In a recent survey from The Economist/YouGov, 51 percent across the board states that Biden should not seek office again. Perhaps what is worse for the president is the fact that less than half, 46 percent, of Democrats want him to run again, and only 44 percent of those who voted for him in 2020 want him to throw his hat in the ring in 2024.

When asked if Biden is the only Democrat who could defeat Trump in the next presidential election, Pelosi responded with a resounding “no.”

“I think we have other great candidates when the time comes,” she added, according to the Times.

The same survey shows Biden failing to garner a majority support among Democrats in a hypothetical 2024 primary, as he leads with 35 percent. Vice President Kamala Harris follows with 12 percent support. When presented with the same question without Biden in the mix, Harris leads with 26 percent support, followed by Sen. Bernie Sanders (I-VT) and twice-failed presidential candidate Hillary Clinton.

According to reports, White House aides are admitting that Biden’s mounting document scandal could impact his 2024 campaign announcement.

Biden has teased his intention to run again, telling reporters in November that it is “ultimately, a family decision.”

“I think everybody wants me to run, but … we’re going to have discussions about it. And I don’t feel any … hurry one way or another,” he added.

The survey was conducted online within the United States from January 18-19, 2023, among 2,050 registered voters.