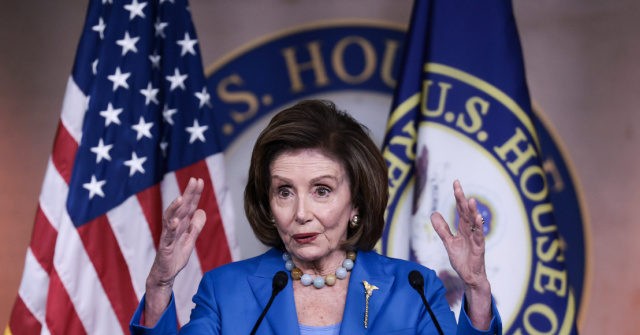 Pelosi was pressed by a reporter, who pointed out a recent poll from CBS News showing that only ten percent of Americans can say they know a lot of specific items in the Democrats’ $3.5 trillion reconciliation bill, in which they have jammed as many far-left ideas as possible to make for a sweeping one-time bill passage.

“Do you think you need to do a better job at messaging and going forward, how do you sell this?” the reporter asked, questioning Pelosi’s messaging skills.

“Well, I think you all could do a better job of selling it, to be very frank with you,” Pelosi responded, sounding distraught that a member of the media asked such a question, casting doubt over the Speaker’s ability to explain a massive spending bill to the public.

“Every time I come here, I go through the list … It is hard to break through when you have such a comprehensive package,” she added. “Whether [Americas] know it or not, they overwhelmingly support it.”

Responding to CBS News poll showing most Americans don’t know specifics of Democrats’ spending bill, Pelosi tells @NikolenDC “it is hard to break through when you have such a comprehensive package”

“Whether they know it or not, they overwhelmingly support it,” she says pic.twitter.com/G0wQLFR6Ju

The reporter was referring to a poll from CBS News that said, “Only 10% of Americans describe themselves as knowing a lot of specific things about what’s in the Build Back Better plan, and a majority admit to either not knowing specifics or anything at all.”

In the Senate, Joe Manchin (D-WV) and Kyrsten Sinema (D-AZ) have consistently said they will not be a rubber stamp and  support the $3.5 trillion price tag on the radical reconciliation bill the Democrats are using to push far-left ideas and campaign promises.