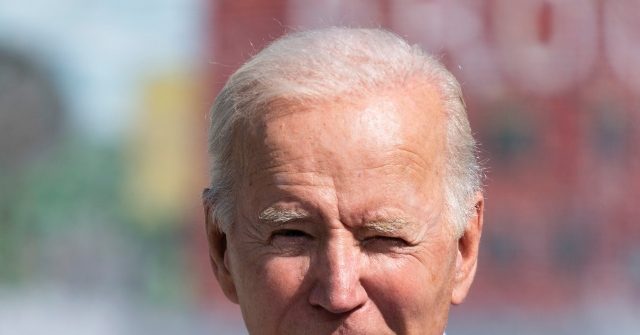 The Trafalgar Group, one of the most accurate and reliable pollsters of the last few election cycles, has only terrible news for His Fraudulency Joe Biden and his recently-announced fascist vaccination mandates.

This particular poll comes at a crucial time when the fake media are releasing fake polls to gaslight the public into believing Biden’s fascist mandates are popular. Well, all anyone needs to remember is that Trafalgar gets it right, and corrupt media outlets, like the AP and CNNLOL, deliberately juice their polls to get the outcomes they want.

According to Trafalgar, nearly 60 percent (58.6 percent) of “voters do not believe President Biden has the constitutional authority to force private businesses to require vaccine mandates for employees[.]”

Meanwhile, only 29.7 percent “believe he does have the authority” [emphasis mine],  while 11.7 percent don’t know.

In worse news for His Fraudulency, a clear majority of 56.1 percent “support the efforts of state governors to oppose Biden’s nationwide vaccine mandate on private businesses.” Of those 56.1 percent, 46.3% “strongly support” it.

Among swing voters, or Independents, a whopping 68.2 percent “don’t believe President Biden has the constitutional authority to force private businesses to require vaccine mandates for employees,” and only 21 percent disagree.

On the issue of governors opposing Biden’s fascist mandate, a whopping 62.3 percent of Independents support it, and 45 percent strongly support it.

It’s no surprise that 83.5 percent of Republicans say Biden lacks the constitutional authority for these mandates, and 78.5 percent want their governors to fight back.

This is terrible news for Biden, coming just four days after he announced these mandates, and did so in an effort to change the conversation away from the fact that he just armed the Taliban with tens of billions of dollars in working U.S. war equipment and handed them hundreds of American hostages.

A big concern of a majority of voters, 55.5 percent, is that a federal national vaccine mandate “sets a precedent that could be abused by future presidents on other issues.” No kidding.

“The numbers are clear, the American people passionately oppose Biden’s vaccine mandate, and will not tolerate a President elected by the people acting like a dictator or king,” said Mark Meckler, President of Convention of States Action, the organization that commission the poll.

He added, “Our citizens stand squarely with courageous, principled governors who know this isn’t about health, science, or compassion, it’s a naked political power grab.”

Trafalgar reports that this poll of 1,000 likely voters was taken between September 10 and 12.

As far as the fake polls coming from the fake media, they don’t matter. What matters is what voters really think, and this here is what they really think. And keep in mind that a lot of the same people opposed to these mandates are pro-vaccine — including me.

The vaccine isn’t the issue here. What’s an issue is forcing people to have a medical procedure performed on them against their will. What’s at issue is a failing president and his butt-boy media going the full-Hitler in identifying the unvaccinated as only Trump voters and then demonizing those people as diseased and dangerous.

If you overeat, it doesn’t affect my diet.

If you don’t get the vaccine, it doesn’t affect my vaccine.

I hope everyone gets vaccinated, and I believe the death rate of the vaccinated versus the unvaccinated is as compelling as it gets, but that’s your choice. Not mine, and not Joe Biden’s.