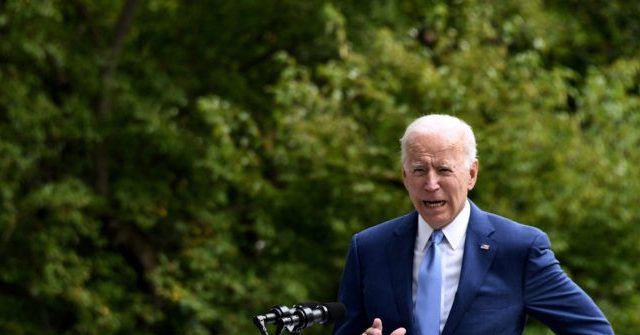 President Joe Biden is losing trust from the American people on the Chinese coronavirus, an Axios-Ipsos poll released Tuesday found.

According to the survey, less than half, 42 percent, trust the president “a great deal or a fair amount” on providing accurate information on the virus.

“He’s basically losing the expectations game,” Cliff Young, president of Ipsos U.S. public affairs, said. “Once the Delta variant raised its ugly head, it affected people’s lives, and now they’re adjusting their expectations, which is not good for him.”

Even support among Democrats, specifically, has dropped in recent months. While a majority, 81 percent, say they have “at least a fair amount of trust” in the president, that represents a seven-point drop from the 88 percent who said the same in June.

Moreover, the percentage of Democrats who say they trust Biden a “great deal” sank from 45 percent to 33 percent.

“With independents, the ‘great deal’ measure has dropped from 17% to 11%. Just 2% of Republicans say they trust Biden a ‘great deal’ — that’s remained steady since June,” according to Axios.

“In the absence of a villain, Democrats are kind of turning on the president because they don’t know who else to blame,” Ipsos pollster Chris Jackson said, noting a lot of his supporters “still feel very anxious about COVID.”

It coincides with recent surveys showing Biden’s approval on the coronavirus, one of the central points of his presidential campaign, sinking underwater, particularly after his divisive coronavirus speech last month, where he berated the unvaccinated and warned that patience is wearing thin.”

A Quinnipiac poll released last month found fewer than half, 48 percent, of Americans approving of Biden’s handling of the virus.