Less than ten percent of Americans are following the January 6 committee’s hearings “very closely,” according to a new ABC News poll.

The ABC News poll comes after the committee finished its first full week of televised hearings. The committee has held three public hearings, with four more on June’s congressional calendar.

So far, the committee’s efforts have only made a six percent difference in the amount of Americans who believe former President Donald Trump should be held criminally liable for the January 6 Capitol riot.

Although the committee portrays itself as “bipartisan,” ABC’s poll found the hearings are divided along party lines. For example, while 91 percent of Democrats think Trump should be charged with a crime for the Capitol riot, less than 20 percent of Republicans think so. 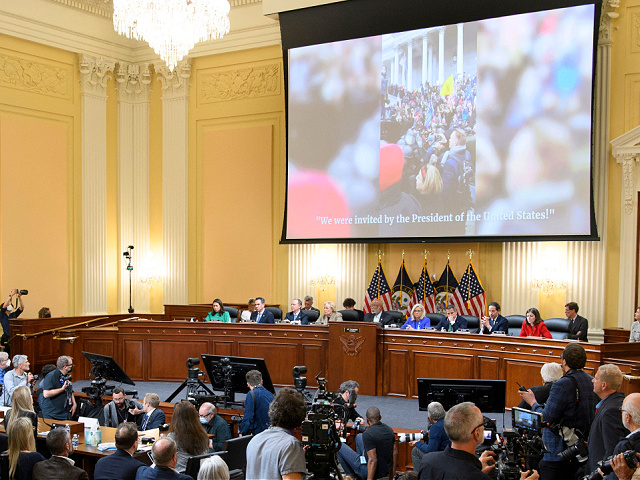 An image is displayed during a hearing by the Select Committee to Investigate the January 6th Attack on Capitol Hill on June 9, 2022, in Washington, DC. (Photo by Mandel Ngan-Pool/Getty Images)

Trump blasted the “unselect” committee on Friday at the Faith and Freedom Coalition conference.

“There’s no clearer example of the menacing spirit that has devoured the American left than the disgraceful performance being staged by the unselect committee,” Trump said. “They’re con people, they’re con artists.”

“The committee refuses to play any of the tape of people saying the good things, the things that we want to hear, It’s a one-way street. It’s a rigged deal,” Trump added.

Trump’s criticism echoes comments made by former Trump adviser Jason Miller, who called out Cheney and the committee for deceptively editing pieces of his testimony during the committee’s first primetime hearing.