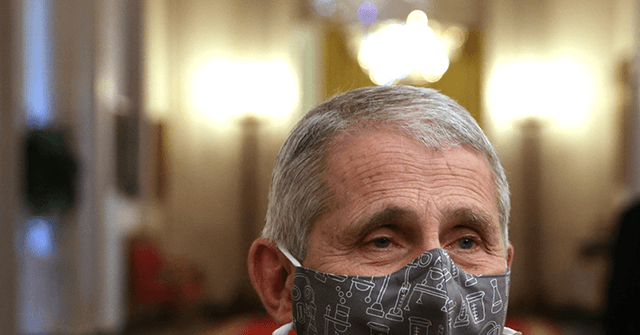 The majority of Americans agree that Dr. Anthony Fauci has lost credibility with the American people, a Rasmussen Reports survey released Tuesday found.

The survey asked, “Do you agree or disagree with this statement: ‘Fauci has lost all credibility with the American people. We aren’t waiting on his permission to celebrate Christmas together.’”

Fauci: “too soon to tell” whether families could get together to celebrate Christmas.

A majority of Republicans and independents agree with the statement that Fauci has lost credibility, 74 percent and 54 percent, respectively.

Democrats, however, disagree, as 36 percent agree he has lost credibility, compared to 54 percent who disagree.

The National Institute of Allergy and Infectious Diseases head came under fire this month after appearing on CBS’s Face the Nation, where he asserted it was “just too soon to tell” if Americans can gather with friends and family for Christmas.

HOLIDAY LOOKAHEAD: “It’s just too soon to tell,” Dr. Anthony Fauci tells @margbrennan when pressed whether or not people can safely gather together for Christmas this year.

He says the country should instead concentrate on getting COVID cases down. pic.twitter.com/ey0ft9aCOh

“And we can do it by people getting vaccinated. Also, in the situation where boosters are appropriate to get people boosted because we know they can help greatly in diminishing infection and diminishing advanced disease,” he added.

Fauci later said his remark was “taken completely out of context.”

“I mean, I say you hold off on that. I said we don’t know because we’ve seen slopes that went down and then came back up,” he said. “The best way to assure that we’ll be in good shape as we get into the winter would be to get more and more people vaccinated. That was misinterpreted as my saying we can’t spend Christmas with our families, which was absolutely not the case.”

I will be spending Christmas with my family. I encourage people, particularly the vaccinated people who are protected, to have a good, normal Christmas with your family. But … the way all of the other disinformation goes around, you say something talking about a landmark of a time, and it gets misinterpreted that I’m saying you can’t spend family Christmas time, which is nonsense. You can.

That would not be the first time Fauci has seemingly reversed course. He came under fire throughout the pandemic for flip flopping on masks on numerous occasions, first dismissing the need for them, only to end up seemingly supporting double masking after initially dismissing that as well.