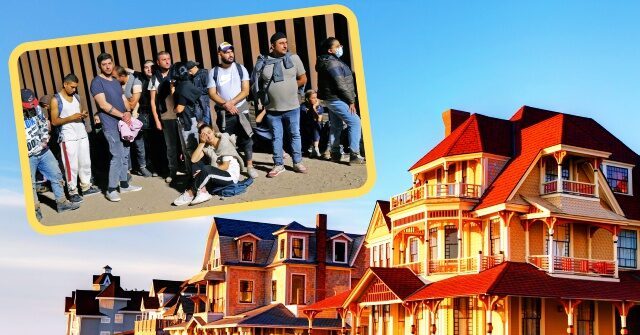 A plurality of swing voters support Republican governors busing and flying illegal aliens out of their states to sanctuary cities such as Florida Gov. Ron DeSantis’s (R) recent migrant flight to Martha’s Vineyard.

The YouGov poll reveals that 44 percent of swing voters said they support governors like DeSantis and Texas Gov. Greg Abbott (R) busing and flying illegal aliens out of their states to sanctuary cities like Chicago, New York City, and Washington, D.C.

About 38 percent of swing voters said they disapprove of migrant buses and flights to sanctuary cities while almost 20 percent said they were unsure about the issue.

The poll comes as DeSantis sent two flights packed with 50 illegal aliens from Venezuela to Martha’s Vineyard, where former President Obama has a sprawling 29-acre estate.

Less than 48 hours after their arrival, officials on Martha’s Vineyard declared a “humanitarian crisis” and claimed they have a “housing crisis” that prevents them from being able to absorb border crossers and illegal aliens, even as the island could shelter six million refugees.

As a result, Massachusetts Gov. Charlie Baker (R) intervened to bus the illegal aliens off Martha’s Vineyard to Joint Base Cape Cod. Some of the illegal aliens are now suing DeSantis, backed by a George Soros-funded group, claiming he violated their Fourth and Fourteenth Amendment rights.

Likewise, 50 percent of middle-class Americans — earning $50,000 to $100,000 a year — support Republican governors busing and flying illegal aliens to sanctuary cities. The only income bracket to oppose the migrant buses and flights are those earning $100,000 or more a year.

Most recently, as Texas continues sending border crossers and illegal aliens to Chicago, Illinois Gov. J.B Pritzker announced that he is activating 75 members of the National Guard to deal with the influx of illegal immigration which represents, so far, just 0.01 percent of President Joe Biden’s border crisis.

Abbott is expected to bus about 15,000 border crossers and illegal aliens to Chicago over the next 15 weeks. Thousands more, similarly, are expected to be bused to New York City and Washington, D.C.

The YouGov poll surveyed nearly 1,500 American adults from September 17 to September 20 and has a margin of error of +/- 2.9 percentage points.