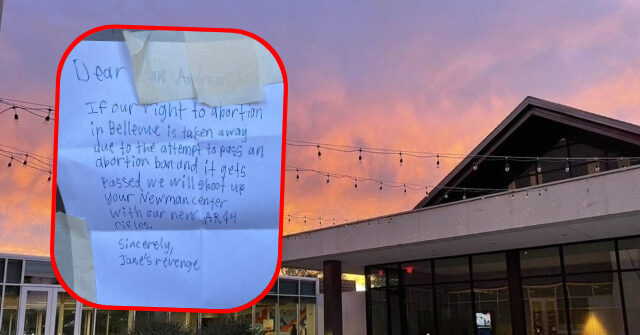 A pro-life group received a note which appeared to be signed by the pro-abortion domestic terror group “Jane’s Revenge” threatening to “shoot up” the space where the activists were meeting.

Members of Students for Life Action said they saw the note taped to the front of the St. John Paul II Newman Center in Omaha, Nebraska on Saturday after they arrived to host its Nebraska Political Leadership Workshop. The purpose of the workshop was to “strategize about how to use Students for Life’s Campaign for Abortion Free Cities to shut down Dr. Leroy Carhart’s infamous late-term abortion facility in the state and work towards the Sanctuary City Ordinance in Bellevue.”

If our right to abortion in Bellevue is taken away due to the attempt to pass an abortion ban and it gets passed we will shoot up your Newman center with our new AR14 rifles (sic). Sincerely, Jane’s revenge.

Students for Life Action said the note appears to refer to their Campaign for Abortion Free Cities’ (AFC) work to pass a pro-life Sanctuary City Ordinance in Bellevue, Nebraska. The organization noted that since the launch of the Bellevue campaign in March 2021, they have “reached 12,271 neighbors, held 2,212 in-person conversations with community members, activated over 1,000 people, and changed the minds of hundreds.”

The Newman Center is located near the University of Nebraska-Omaha’s Scott Campus. It also houses some UNO and surrounding college students, according to KETV Omaha.

UNO Public Safety told the outlet they are working with Omaha police and the Douglas County Sheriff’s Office to investigate the “threat of violence.” Authorities said the area will have increased security amid the ongoing investigation. Breitbart News did not receive a response to a request for comment from police or from FBI Omaha by the time of publication.

Rev. Dan Andrews, the director of the center, told the outlet they will not be deterred.

“This obviously causes us great concern. Our number one priority is the safety of our students… we are thankful for UNO Police’s prompt response and attention to this threat,” Andrews said.

The threat is the latest case among more than a dozen pro-life center and church vandalisms and fire-bombings claimed by Jane’s Revenge. The FBI said in June that it was investigating a wave of attacks against pro-life centers across the country, but as of early October, the FBI had not confirmed whether any arrests had been made in attacks against at least 83 Catholic churches and 73 pregnancy resource centers and organizations.

Students for Life has been calling on President Joe Biden’s Attorney General Merrick Garland to “do his job” in protecting Americans of all views, rather than using his office to “repeatedly weapon[ize] the law against those with pro-life views, either by neglect or attack.”

“The incendiary and malignant comments of people like Hillary Clinton, comparing peaceful pro-life Americans to terrorists is case in point of the poison political climate being deliberately fostered by Corporate Abortion and their political allies,” Hawkins continued. “The Pro-Life Gen will not be silent in our defense of preborn children and their mothers. But let’s be clear, the Biden Administration’s negligence and toxic support of death by abortion is laying the groundwork for horrifying headlines and loss of life, should they not act in defense of all Americans starting today.”