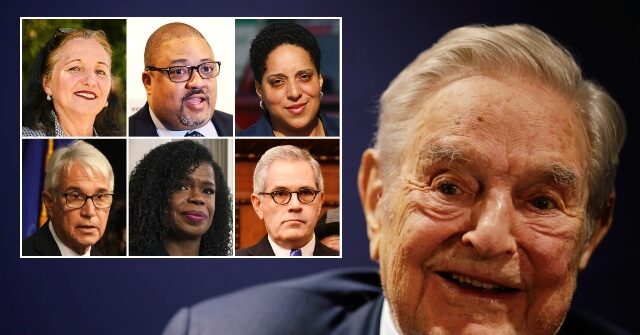 Billionaire George Soros has spent more than $40 million getting far-left district attorneys, with agendas to decriminalize a number of crimes, elected across the United States.

The investment, published in the New York Post by author Matt Palumbo, means “Soros-backed DAs (and their ideological allies) now represent at least one-fifth of Americans.”

Last year, Breitbart News published a list of the “Soros Dozen” — big city district attorneys who got elected, thanks to financial backing from Soros, on vows to bend the weight of justice in favor of accused criminal suspects over alleged victims and the general public.

Los Angeles District Attorney George Gascon, for instance, was backed by Soros and immediately after winning office instituted a taxpayer-funded effort to help criminal illegal aliens avoid deportation, announced he would not be prosecuting a number of crimes, eliminated bail, and has refused to seek the death penalty for suspects accused of even the most heinous crimes.

Most recently, Soros-backed Loudoun County, Virginia, Commonwealth’s Attorney Buta Biberaj announced a whole host of crimes that she will not prosecute. Those crimes include hit-and-run with property damage, evading police, reckless driving under 90 miles per hour, and trespassing.