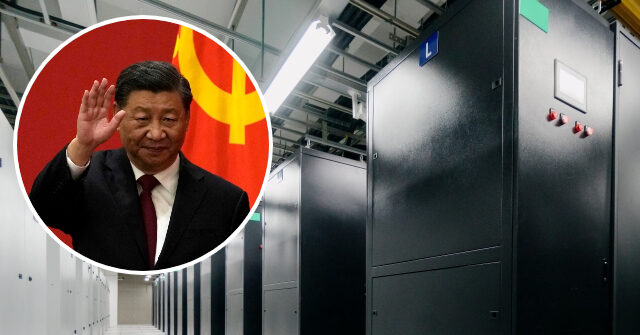 A whistleblower recently filed a lawsuit against Konnech, Inc. and its CEO Eugene Yu that backs up allegations from the non-profit True the Vote that the company stored American poll worker data in China, according to a report.

According to a December 22, 2023, verified complaint from former Konnech employee and whistleblower Grant Bradley reported by the Federalist on Friday, the firm “illegally” stored information on servers housed in China.

Plaintiff’s reputation in his chosen field has been ruined by the decision of Defendants to illegally store information on servers housed in China.

The Federalist reported: “That allegation suggests that Konnech had, in fact, stored data on ‘servers housed in China,’ and that possibility resurrects concerns over the FBI’s involvement in the investigation of Konnech, as well as the L.A. district attorney’s decision to drop the criminal charges it had brought against Yu.”

Bradley’s complaint also alleged that a number of the company’s employees were based in Wuhan, China:

On October 4, 2022, police raided Konnech’s office in Lansing, Michigan, and arrested Yu as part of an investigation into the possible theft of personal identifying information of Los Angeles County election poll workers, according to a press release by the L.A. County district attorney’s office.

Konnech, Inc. distributes and sells PollChief software, an election worker management system that requires workers to submit personal identifying information. Under a $2.9 million, five-year contract with L.A. County, Konnech was supposed to “securely maintain the data and that only United States citizens and permanent residents have access to it.” However, the press release said, “District Attorney investigators found that in contradiction to the contract, information was stored on servers in the People’s Republic of China.”

District Attorney George Gascón said in the press release, “Data breaches are an ongoing threat to our digital way of life. When we entrust a company to hold our confidential data, they must be willing and able to protect our personal identifying information from theft. Otherwise, we are all victims.”

In November, Gascón moved to dismiss the criminal charges against Yu.

After the 2020 election, nonprofit True the Vote claimed it found evidence that Pollchief data was possibly being stored on a server located in China, according to a previous Federalist article in November. True the Vote board member Greg Phillips testified in court that an individual named Mike Hasson had contacted him and showed him “enormous amounts of data on a server located in China, some of it including sensitive data on American poll workers,” according to the report.

Phillips said he informed the nonprofit’s founder Catherine Engelbrecht and they immediately made a complaint to the director of national intelligence and the FBI. The FBI then launched an investigation, according to Phillips. He said that he and Engelbrecht worked closely with the FBI for approximately 17 or 18 months, but then in May of 2022, the FBI seemed to turn against the group. Phillips said it happened right before the release of “2,000 Mules,” a documentary on potential voter fraud in the 2020 election featuring True the Vote.

True the Vote then decided to go public with the information in August 2022, and in September 2022, Konnech sued them for defamation, denying that they had ever stored “any actual customer or poll worker data on any server in China.” In October 2022, Yu was arrested and a search warrant was executed at Konnech in Michigan.

The complaint said that after True the Vote’s allegations against Konnech, Bradley began investigating the “extent of the information provided to the Chinese programmers by Defendants Yu and Konnech and began researching state and federal laws regarding the sharing of personal identifying information with foreign nationals.”

“Plaintiff recognized that Defendants had been breaking the law for some time and immediately set out to find alternative work. Regrettably, Plaintiff’s efforts to secure alternative work were unsuccessful before the raid by police,” it said.

The complaint said after Yu’s arrest, Bradley requested to speak to the lead investigator from the L.A. County D.A.’s office and offered additional information. According to the complaint, Bradley also told senior level management for Konnech that he would not lie to clients about their data being made available to foreign nationals.

Bradley said his supervisors had allegedly asked him not to speak to the police or cooperate in their investigation of Yu and Konnech, which he ignored.

Bradley is suing Konnech for alleged violation of the Michigan Whistleblowers’ Protection Act and for wrongful termination under state law.

He is seeking compensation of $25,000 for loss of earnings, loss of career opportunities, mental and emotional distress, loss of reputation and esteem in the community, and attorney fees and costs.

The complaint from Bradley also said he had “confirmed that Defendants Yu and Konnech had been providing to these Chinese programmers private data of poll workers, to include social security numbers and other personal identifying information.”

He also claimed he “worked with the Chinese programmers on a daily basis,” and that he “witnessed customer’s data (specifically poll watcher information) being made accessible to foreign nationals from China.”

Bradley said when he raised concerns to his direct supervisors about foreign nationals having access to this data, he was told, “everyone [other software companies like Microsoft and Apple] was doing it.”

He alleged that soon after he began working at Konnech, Yu approached him “about making a campaign contribution to Michigan Secretary of State Jocelyn Benson’s campaign in his name,” and that Konnech offered to then “reimburse him” for the donation.

“Plaintiff immediately recognized Defendant Yu’s request to be a violation of Michigan Campaign Finance Law and rejected the overture from Defendant Yu,” the complaint said.