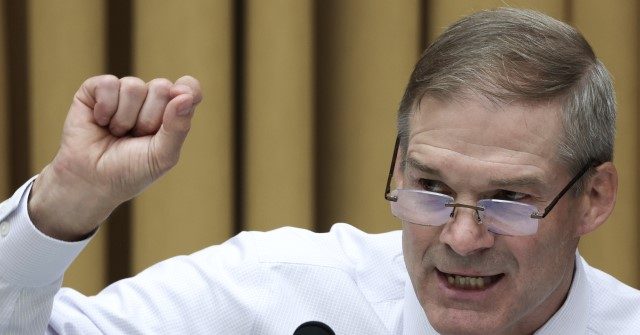 FBI agents executed a search warrant at Trump’s Mar-a-Lago, Florida, residence on Monday, ostensibly in connection with an investigation into the handling of presidential documents. It was the first such raid in the history of the country.

As Democrats and liberal cable pundits celebrated, Republicans were united in their condemnation of what appeared to be an effort to abuse law enforcement to target a member of the opposition and a likely candidate in the next presidential election.

Experts said that the raid appeared excessive, even if it had a legitimate purpose. Critics also noted the fact that Democrats who appeared to have committed misconduct — including President Joe Biden’s son, Hunter Biden — had never been raided.

Rep. Jim Jordan (R-OH), the ranking minority member of the House Judiciary Committee, noted that the House would be in session on Friday to vote on the so-called “Inflation Reduction Act,” which passed the Senate on Sunday, that Wray and Garland should use the opportunity to appear before the committee on Friday to explain the extraordinary raid to Congress.

.@HouseJudiciary should bring Chris Wray and Merrick Garland to testify on Friday.

This Friday, we’re going back to vote on this stupid bill … Merrick Garland, Chris Wray, come to the House Judiciary Committee this Friday and answer our questions about this action today, which has never happened in American history. … Why not talk to President Trump and have him give the information that you’re after? This is unbelievable, and understand the history here: One year ago it was Merrick Garland using the Patriot Act against parents. One day ago, it was 87,000 agents in a bill the Democrats passed to go harass Americans from the IRA. And today, we have the raid of a former president’s home? In America? So — heck, we deserve answers now, and this Friday would be a good time.

The ultimate decision to ask Wray and Garland to testify would be up to committee chairman Rep. Jerrold Nadler (D-NY).