Senate Republicans on Tuesday questioned Secretary of State Antony Blinken about who is really in charge of making decisions at the White House amid multiple feeds of President Joe Biden being cut off by a “puppeteer” in mid-conversation at public events.

For more than 2 minutes at the beginning of a hearing on Afghanistan, Sen. James Risch (R-ID) presses Secretary of State Antony Blinken about “somebody in the White House” who “pushes the button” to cut off Biden mid-sentence.

“We know for a fact that the President of the United States is somewhat disadvantaged here, in that someone is calling shots. He can’t even speak without someone in the White House censoring it or signing off on it,” Risch explained, giving an example from Monday when the White House feed was cut mid-sentence by “a puppeteer act” while Biden was speaking during a scheduled event:

Why did the White House live stream cut out right when Biden started asking a question pic.twitter.com/pBqDe0BAov

“In mid-sentence [Biden] was cut off by someone in the White House who makes the decision that the President of the United States is not speaking correctly,” Risch observed. “So I’d like to know who this person is. This is a puppeteer act if you would, and we need to know who is in charge and who’s making these decisions.”

“There is no such person,” Blinken replied. “Again, the president speaks for himself.”

“Are you telling the committee this has not happened and no one pushes the button and cuts him [Biden] off in mid-sentence,” Risch said, seemingly not able to believe what the Secretary was telling the Senate committee.

“That is correct,” Blinken replied.

Risch posed the question differently. “He does speak for himself,” Risch supposed, “but what happens when somebody doesn’t want him speaking. You’re telling us you don’t know anything about this, that somebody cuts him off in mid-sentence,” Risch asked. 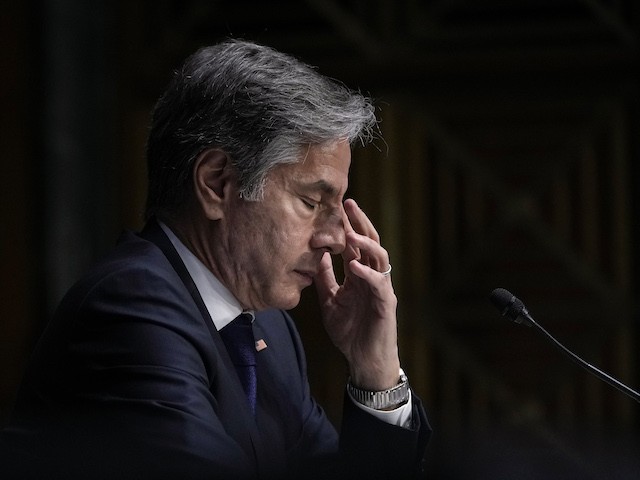 Blinken reiterated his beliefs by doubling down. “Anyone who trie[s] to stop him [Biden] from saying what he wanted to say, speaking his mind, would probably not be [there] long for their job,” Blinken claimed.

The Senate Republicans’ line of questioning comes as the White House has been cutting Biden off while he is speaking or engaging with others, seemingly preventing the president from sharing thoughts that are not written by White House staff.

For instance, when Biden was engaging with House Speaker Nancy Pelosi (D-CA) in March, Biden said was ready to answer questions “if that is what I’m supposed to do, man.” The video shows Pelosi nervously smiling before the video feed ended.

“I’m happy to take questions if that’s what I’m supposed to do, Nance, whatever you want me to do”

In another example on August 12, Biden was mid-sentence when the White House feed abruptly ended. “Let me close with this,” Biden said before the feed terminated on the speaking Biden in mid-sentence:

Biden says “let me close with this” as live stream abruptly cuts off pic.twitter.com/pzmxfXT4eA

Later in August, audio was cut to prevent Biden from answering questions from reporters. The video shows Biden’s mouth moving with no sound, which had previously been audible:

SICK! When Biden’s asked what he’ll do if Americans are TRAPPED in Afghanistan after 8/31, he LAUGHS then his handlers cut off the audio. This is all one big joke to him. THIS IS NOT FUNNY! He needs to RESIGN immediately!
pic.twitter.com/oDIoO6zhYu

Concern over who is making decisions for Biden have grown due to Biden’s continual comments of excusing his lack of question taking from reporters. “I’ll be in trouble,” he sometimes says before taking one more question.