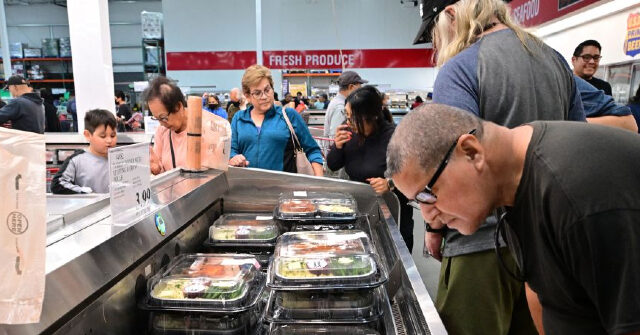 The prices of Thanksgiving staples are up significantly “thanks to Democrats,” the official GOP account said on social media ahead of the major American holiday.

“Thanks to the Democrats…” the GOP began, listing how high prices of Thanksgiving items have soared this year, listing turkey up 21 percent, frozen pie crusts up 26 percent, and dinner rolls up 22 percent, just as a few examples:

Thanks to the Democrats…

Indeed, data from the American Farm Bureau shows that an average Thanksgiving meal for ten has gone up 20 percent since last year, going from $53.31 to $64.05.

The centerpiece on most Thanksgiving tables – the turkey – is a big driver of the increase. According to the Farm Bureau, the average price per pound is up 21 percent from last year.

The consumer price index for food consumed at home is up 12.4 percent compared with a year ago. The broad index of consumer prices is up 7.7 percent over the last 12 months.

The Farm Bureau’s survey, specifically, found several stapes up — one pound of frozen peas up 23 percent, a one-pound veggie tray is up eight percent, and half pint of whipping cream is up 26 percent.

The price increases coincide with recent polls, including a Personal Capital survey showing one in four Americans planning to skip the holiday meal to save money.

A recent survey from The Vacationer also found two-thirds of Americans affirming that high prices are affecting their Thanksgiving plans. Of those, roughly a quarter cited the high cost of food, specifically.