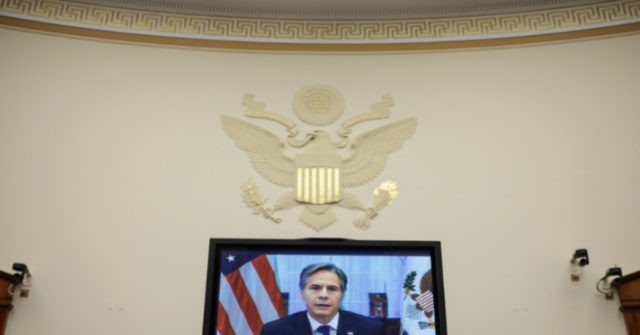 “Can you tell us how many of them remain in country and what is our plan to facilitate their evacuation” Rep. Gregory Meeks (D-NY) asked Blinken.

“As of the end of last week, we had about 100 American citizens in Afghanistan who had told us they wish to leave the country,” Blinken said. “I want to emphasize that this is a snapshot in time.”

Blinken then hedged his number against reports that have indicated between 100 to 5,000 Americans remain in the country. It is impossible to know “at any given moment in time exactly how many American citizens or in any country, ah, is something we can’t and don’t know. Americans are not required to register when they go to a foreign country or if they reside there.”

“The Taliban made abundantly clear in many public statements, private statements to us, to others around the world, that it was going to hold us to the deadline that the previous administration negotiated in terms of withdrawing the remaining American forces,” Blinken said.

Blinken continued to say the Taliban manipulated the Biden administration to remove U.S. forces upon threat of violence. The Taliban

…made very clear that if we moved past that deadline, it would resume the attacks that it had stopped on our forces and on our allies and partners as well as to commence the onslaught on the cities that we have seen in recent months. So that was exactly the choice for President Biden faced.

Blinken’s statement comes as the Taliban told the New York Times on Monday they were surprised by how quickly Biden “abandoned” Afghanistan.

It was a surprise for us how the former administration abandoned the government. We were not fully prepared for that and are still trying to figure things out to manage the crisis and try to help people in any way possible.

It is unknown how many Americans remain hostage in Afghanistan. The White House originally estimated 11,000 Americans were trapped in the country upon its collapse. But the Associated Press reported only 6,000 have been evacuated, potentially leaving 5,000 in the country.

Biden himself stated in his congratulatory speech after the deadly evacuation that he stranded ten percent of Americans behind enemy lines.