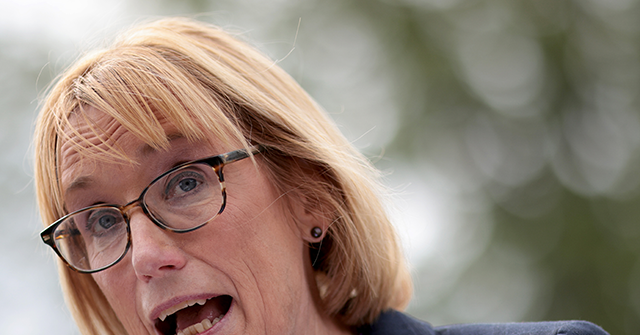 A conservative super PAC that has run ads in New York State and Arizona attacking incumbent Senate Democrats for a “corrupt bargain” with the far-left is expanding its campaign to New Hampshire, where it will target “extremist” Sen. Maggie Hassan (D-NH).

Until recently, Hassan enjoyed a lead in the high single digits over Republican challenger Don Bolduc in opinion polls. But a new Trafalgar poll Tuesday suggested that Bolduc has closed the gap to just over three points.

With momentum shifting back towards the GOP nationwide, and after a successful run in other states, the Frontiers of Freedom super PAC is taking on Hassan.

As in the ads that have run in other states, the Frontiers of Freedom ad urges the media to ask Hassan about concessions that she and her party have made to the “Squad” and others on the far left to vote for their policies in exchange for avoiding direct political fights.

A one-minute spot that will air during nightly news broadcasts and Fox News Sunday describes Hassan as the “deciding vote” on several left-wing bills:

An expanded two-minute ad is also being released:

The ads link Hassan to unpopular Democrat incumbent President Joe Biden, with whom, the ads say, she has voted 96% of the time.

In calling Sen. Hassan an “extremist,” the super PAC appears to be turning the tables on Democrats, who poured tens of millions of dollars into the state to ensure that Bolduc, who is perceived as a “MAGA Republican,” won the primary instead of a moderate.