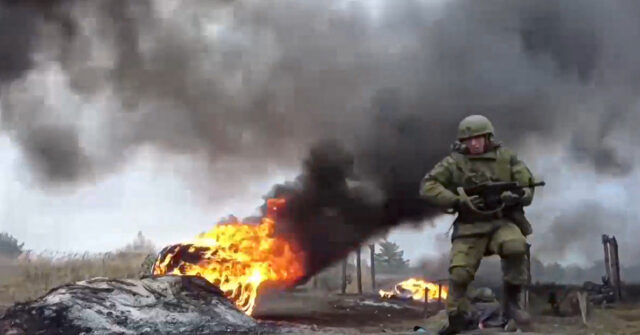 Britain’s Ministry of Defence (MoD) has claimed that Russian public support for the Ukraine war is “falling significantly” as it drags on and touches an increasing number of Russian families.

In its Sunday update on the course of the war, the Ministry of Defence said that “polling suggests that Russian public support for the ‘special military operation’ is falling significantly”, using Russia’s preferred term for its invasion of the former Soviet Socialist Republic, ostensibly in defence of its ethnic Russian minority.

To support this, the MoD cited an “independent Russian media outlet” which has “claimed access to data collected by Russia’s Federal Protective Service for internal use.”

“The data indicated 55 percent of Russians favour peace talks with Ukraine, with only 25 percent claiming to support continuing the conflict,” they added — although whether the Russians who favour peace would accept it on any terms was not elucidated.

Find out more about the UK government’s response: https://t.co/wgwjroo1ys

The British suggested that support for the war is falling, despite “the Russian authorities’ efforts to enforce pervasive control of the information environment”, because “the conflict has become increasingly tangible for many Russians since the September 2022 ‘partial mobilisation’” which saw the Kremlin attempt to call up hundreds of thousands of civilians with military experience for service, sometimes in questionable circumstances.

The MoD has previously claimed that these reservists are being ” killed in large numbers in frontal assaults into well-established Ukrainian defensive zones around the town of Bakhmut” in the Donetsk region, now the main focus of Russian offensive operations amid large-scale routs from first the Kharkiv (Kharkov) region and then Kherson, following the abandonment of an offensive towards Kyiv (Kiev) in the opening stages of the war.

“The Kremlin will likely be concerned that an increasing number of reservists’ families are prepared to risk arrest by protesting against the conditions their relatives are serving under,” the MoD suggested at the time.

“With Russia unlikely to achieve major battlefield successes in the next several months, maintaining even tacit approval of the war amongst the population is likely to be increasingly difficult for the Kremlin,” they said in their latest update, returning to the theme.